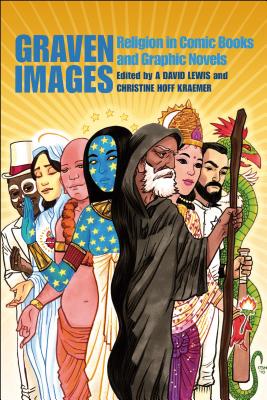 Comic books have increasingly become a vehicle for serious social commentary and, specifically, for innovative religious thought. Practitioners of both traditional religions and new religious movements have begun to employ comics as a missionary tool, while humanists and religious progressives use comics' unique fusion of text and image to criticize traditional theologies and to offer alternatives. Addressing the increasing fervor with which the public has come to view comics as an art form and Americans' fraught but passionate relationship with religion, Graven Images explores with real insight the roles of religion in comic books and graphic novels.

In essays by scholars and comics creators, Graven Images observes the frequency with which religious material-in devout, educational, satirical, or critical contexts-occurs in both independent and mainstream comics. Contributors identify the unique advantages of the comics medium for religious messages; analyze how comics communicate such messages; place the religious messages contained in comic books in appropriate cultural, social, and historical frameworks; and articulate the significance of the innovative theologies being developed in comics.

A. David Lewis is a national lecturer in Comics Studies, an award-winning graphic novelist, and a PhD candidate in Religion and Literature at Boston University. Christine Hoff Kraemer holds a PhD in Religion and Literature from Boston University and is Department Chair of Nature, Deity, and Inspiration at Cherry Hill Seminary, South Carolina.
Loading...
or support indie stores by buying on