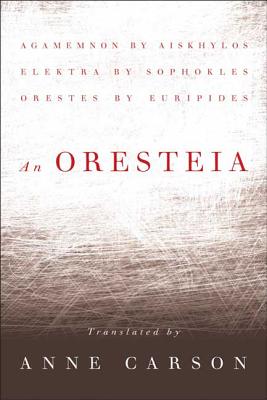 A Bold, Iconoclastic New Look at One of the Great Works of Greek Tragedy

In this innovative rendition of "The Oresteia," the poet, translator, and essayist Anne Carson combines three different visions Aischylos' "Agamemnon," Sophokles' "Elektra," and Euripides' "Orestes" giving birth to a wholly new experience of the classic Greek triumvirate of vengeance. After the murder of her daughter Iphegenia by her husband Agamemnon, Klytaimestra exacts a mother's revenge, murdering Agamemnon and his mistress, Kassandra. Displeased with Klytaimestra's actions, Apollo calls on her son, Orestes, to avenge his father's death with the help of his sister Elektra. In the end, Orestes, driven mad by the Furies for his bloody betrayal of family, and Elektra are condemned to death by the people of Argos, and must justify their actions signaling a call to change in society, a shift from the capricious governing of the gods to the rule of manmade law.

Carson's accomplished rendering combines elements of contemporary vernacular with the traditional structures and rhetoric of Greek tragedy, opening up the plays to a modern audience. In addition to its accessibility, the wit and dazzling morbidity of her prose sheds new light on the saga for scholars. Anne Carson's "Oresteia "is a watershed translation, a death-dance of vengeance and passion not to be missed.

Anne Carson was born in Canada and teaches Ancient Greek for a living. She is currently a professor of classics, comparative literature and English at the University of Michigan, Ann Arbor. Her publications include Eros the Bittersweet (1986), Glass, Irony and God (1995), Autobiography of Red: A Novel in Verse (1998), Economy of the Unlost (1999), The Beauty of the Husband: A Fictional Essay in 29 Tangos (2001), If Not, Winter: Fragments of Sappho (2002), Decreation: Poetry, Essays, Opera (2005) and Grief Lessons: Four Plays by Euripides (2006).
Loading...
or
Not Currently Available for Direct Purchase