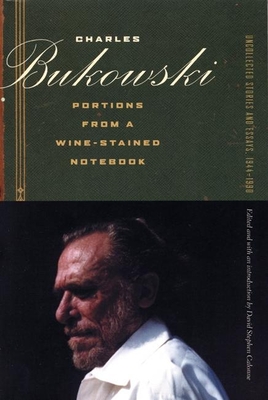 Portions from a Wine-Stained Notebook

Charles Bukowski (1920-1994), one of the most outrageous and controversial figures of 20th-century American literature, was so prolific that many important pieces were never collected during his lifetime. Portions is a substantial selection of these wide-ranging works, most of which have been unavailable since their original appearance in underground newspapers, literary journals, even porno mags. Among the highlights are his first published short story, Aftermath of a Lengthy Rejection Slip; his last short story, The Other; his first and last essays; and the first installment of his famous Notes of a Dirty Old Man column. The book contains meditations on his familiar themes (drinking, horse-racing, etc.) as well as singular discussions of such figures as Artaud, Pound, and the Rolling Stones. Other significant works include the experimental title piece; a fictionalized account of meeting his hero, John Fante (I Meet the Master); an unflinching review of Hemingway (An Old Drunk Who Ran Out of Luck); the intense, autobiographical Dirty Old Man Confesses; and several discussions of his aesthetics (A Rambling Essay on Poetics and the Bleeding Life Written While Drinking a Six-Pack (Tall), In Defense of a Certain Type of Poetry, a Certain Type of Life, a Certain Type of Blood-Filled Creature Who Will Someday Die, and Upon the Mathematics of the Breath and the Way, revealing an unexpectedly learned mind behind his seemingly offhand productions.

Portions From a Wine-Stained Notebook is essential reading for Bukowski fans, as well as a good introduction for new readers of this innovative, unconventional writer.

You know, I just think this is really hot. Among its many gifts, Portions from a Wine-Stained Notebook has one of the best lesbian sex scenes I ever read. I read Bukowski standing up one day in a bookstore (City Lights) and thought he did it too. What Henry Miller did. He wrote American. When it meant something good. Fucked up, male, but incredibly true. In a distinct rhythm. --Eileen Myles, author of Sorry, Tree and Cool for You

Bukowski wrote the way he lived, and Portions from a Wine-Stained Notebook is as vivid, bad-ass, screamingly funny, and gutter-angelic as the man himself. Reading these stories and essays, you can hear the beating heart of the poet in every line. Bukowski never wasted a word, and this collection should go far towards shining a light on prose in danger of being lost in the shadow of its larger-than-life author. Those new to his work will have the good fortune of discovering a writer who could break your heart, make you howl, and slap you off your bar-stool you in a single sentence. In a world long since gone lousy with faux hard-living typers and posers, he was the original. --Jerry Stahl author of Permanent Midnight, Perv, Plainclothes Naked, and I, Fatty.

Charles Bukowski (1920-1994) published his first story when he was twenty-four and began writing poetry at the age of thirty-five. His first book of poetry was published in 1959; he went on to publish more than forty-five books of poetry and prose, including books published by City Lights Publishers such as Notes of a Dirty Old Man, More Notes of a Dirty Old Man, The Most Beautiful Woman in Town, Tales of Ordinary Madness, Portions from a Wine-Stained Notebook, and Absence of the Hero.


Praise For Portions from a Wine-Stained Notebook: Uncollected Stories and Essays, 1944-1990…

"Bukowski's strength is in the sheer bulk of his contents, the virulent anecdotal sprawl, the melodic spleen without the fetor of the parlor or the classroom, as if he were writing while straddling a cement wall or sitting on a bar stool, the seat of which is made of thorns."-Jim Harrison, NY Times, 2007

"It features a wealth of previously uncollected Bukowski material, including his first published short stories, book reviews, essays on literature, U.S. politics, his writing craft, biographical accounts, entries from his famous NOTES of a DIRTY OLD MAN newspaper column, tips on how to win at the racetrack and even a review of a Rolling Stones concert. David Stephen Calonne provides a lucid and highly learned introduction to the book. . . . No Bukophile should miss out on this book."--Bold Monkey

Charles Bukowski was born in Andernach, Germany in 1920 and brought to Los Angeles at age three. Using the city as a backdrop for his work, Bukowski wrote prolifically, publishing over fifty volumes of poetry and prose. He died in San Pedro, California on March 9, 1994. His books are widely translated and posthumous volumes continue to appear. David Calonne is the editor of a previous book of uncollected Bukowski, Portions from a Wine-Stained Notebook, as well as a volume of interviews, Charles Bukowski: Sunshine Here I Am. He presently teaches at East Michigan University.
Loading...
or support indie stores by buying on