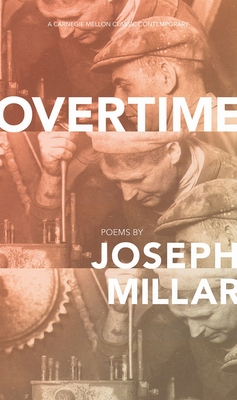 Overtime, Joseph Millar’s first book of poetry, both traditionally elegiac and formally unexpected—aims at the overlap between art and the everyday grind of work and single fatherhood. Here we find poems of loss and grief, alongside poems of working-class celebration that hum with the sound of wind in the ladder racks and miles of telephone wire. Overtime is a book of poetry whose chief concern is not art for its own sake but rather the artistic visions the everyday struggles of life provide when paid the right attention. A poet deeply sunk into William Carlos Williams’ American Grain, Millar grounds his poems in the details and small mysteries of everyday life and labor. Whether the speaker is murmuring a song to the beloved in poems like “Love Pirates” or “Listener,” imagining the travails of a Native American war chief in “Sitting Bull in Canada,” or considering his own inevitable death in “Heart Attack,” Millar tells a story plainly, moving from lyric to narrative and back again in language charged with duende and force. As Yusef Komunyakaa has written, “Millar is a poet we can believe.”

Joseph Millar is the author of  Overtime,Fortune, Blue Rust, and Kingdom. His work has won fellowships from the Guggenheim Foundation, the National Endowment for the Arts, and a Pushcart Prize. He teaches in Pacific University’s Low Residency and in North Carolina State’s MFA program.
Loading...
or
Not Currently Available for Direct Purchase