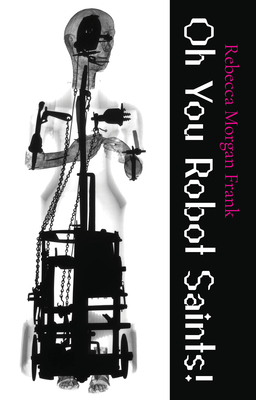 Part bestiary, part litany, part elegy, Rebecca Morgan Frank’s Oh You Robot Saints! is populated by a strange menagerie of early automata and robots, including octobots and an eighteenth-century digesting duck, set alongside medieval mechanical virgins and robot priests. From a riveting robobee sonnet sequence that links weapons of war and industrial fixes for infertility to a microdrama sketching out a missing Sophocles play on the mythical bronze man, Talos, these muscular poems blur and sing the lines between machines and the divine. This lyrical exploration of the ongoing human desire to create life navigates wonder and grief, joining the uncanny investigation of what it is to be, to make, and to be made.

Rebecca Morgan Frank’s Oh You Robot Saints! wrangles with what it means to be a person by exploring the history of robotics in evocative detail. The poems wonder if robots—mechanical ones and spiritual ones—mimic creation itself. Poem after poem reveals profound and frightening thinking-through of using robots as a means to talk about more human things: fertility, mothers, and children (and their absences) and what sacrifices robots may make in their saintly and human forms. This is a weird and interesting book and you should read it.
— Sean Singer

We had always thought our art would be immortal," muses the concluding poem of Oh You Robot Saints!, Rebecca Morgan Frank's timely meditation on the complex work of making. Frank's book reveals how the many kinds of poiesis we humans commit satisfy similar urges: we build so many lovely machines-out of cutting-edge composites, out of words, out of our own genetic material-each with the craving to expand beyond ourselves, to outrun our frail limits. Frank gazes directly at our compulsion to "build / a body that moves," offering these poems as a kinetic example of their own argument. "To be true is to be an imitation," Frank argues; painstaking, handmade, Frank's clockwork poems strike true.
— Kimberly Johnson

The truth is in the job, not the wound” is one of my favorite lines in Rebecca Morgan Frank’s daring Oh You Robot Saints!, a book in which the beauty, jealousy, and worship of the gods take center stage. Part of the precision of this book and every one of its lines has to do with Frank’s commitment to showing us tragedy as the Greeks would through her indomitable use of second person like a director giving instructions: “Fill the ark: start / with the giant flower / beetle . . .” And part of it has to do with full-on Sapphic tenderness: “The women I’ve loved and lived with are dead, / and today it felt like spring might return.” This volume proves Rebecca Morgan Frank is a poet of the exact and the harrowing.
— Jericho Brown

"[Frank] picks at the tension between born and unborn, magic and science, fertility and sterility, the sexed and the sexless, the lifeless, the living, and the never-lived. . .That she reckons with the machine makes the aliveness of her voice, the heat behind it, all the more evident, and all the more urgent."
— The Boston Globe

"Eye-opening, jaunty: this is a whirl of a book."
— The Millions

"Oh You Robot Saints! amasses many compelling visions and intriguing premises. It also holds out for the human subject’s liberation from technological subjugation by fighting back — as Frank writes in 'The Archer in the Tomb,' in which a bold heroine defies capture from her mechanized minions, 'This is a new transfiguration: she programs herself, sets her crosshairs on you.'"
— Hyperallergic

"Oh You Robot Saints! brings the sensibility of a poet to the world of automatons and produces intriguing poems that help us understand our 'quest to be little gods.'”
— Rain Taxi

Rebecca Morgan Frank is the author of three previous titles, including two published by Carnegie Mellon University Press, and Little Murders Everywhere, a finalist for the Kate Tufts Discovery Award. Her poems have appeared in the New Yorker, American Poetry Review, the Kenyon Review, and elsewhere. She lives in Chicago.