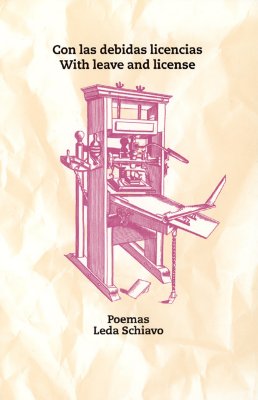 'Con las debidas licencias' is the Spanish version of 'imprimatur' or 'nihil obstat,' the Latin used for books published under Catholic censorship. In Spanish, the title plays with the semiotic richness of the word 'license,' meaning 'liberty of action conceded' and 'abuse of freedom.' The poems of With Leave and License strike the imagination with tenderness and nostalgia, powerful in this intelligent vision of life considered as an irreversible journey.

In this, her first book of poems, Leda Schiavo celebrates a long exile; exile from her country as much as exile from the insincere conventions of everyday life. She was born in Buenos Aires and came to Chicago in 1976. Professor Schiavo teaches Spanish Literature at the University of Illinois.  El éxtasis de los límites, a critical study, is her most recent book.