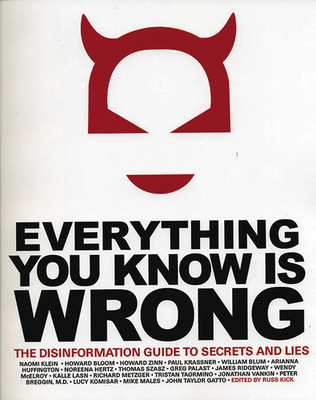 Everything You Know Is Wrong (Paperback)

This book begins where You Are Being Lied To left off. Once again, an amazing group of investigative journalists, researchers, insiders, dissidents, and academics peels back consensus reality and shows us what's really happening. Hard, documented evidence on the most powerful institutions and controversial topics in the world. Among the revelations:

Plus previously unpublished revelations about the International Monetary Fund, the Vatican Bank, the Olympic Games, Henry Lee Lucas, the drug war in South America, unpublicized accidents at nuclear power plants, and much more. Includes reproductions of rare documents and photos, including an unpublished eyewitness sketch of a mysterious third gunman at Columbine.

Russ Kick is the editor of the wildly successful three-volume anthology The Graphic Canon: The World's Great Literature as Comics and Visuals and the bestselling anthologies You Are Being Lied To, Everything You Know is Wrong, and 50 Things You're Not Supposed to Know . His books have sold over half a million copies. The New York Times has dubbed him "an information archaeologist," Details magazine described him as "a Renaissance man," and Utne Reader named him one of its "50 Visionaries Who Are Changing Your World." He is creator of the popular website www.thememoryhole.com.