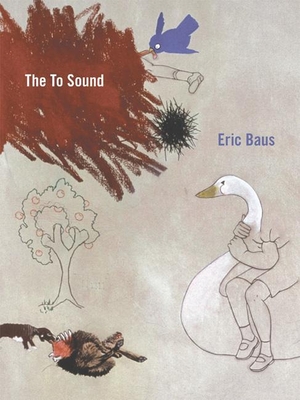 Juliana Spahr writes: Birds with extremely long necks. Cassiopeia. A sister. A Marco Polo. A somnambulist. A documentary on the voyages of Columbus. A cartographer. Star charts. Young intellectuals in black robes. Jean-Michel Basquiat. More birds and still more birds. A mathematician. All these things appear in The To Sound's beautifully warped cosmology. This is a stunning book that builds its own world, a world of ambiguous relations and loaded words; a lyrical world that explores the unstated connections between things. . . .

ERIC BAUS was born in Fort Wayne, Indiana. His publications include the chapbooks the space between magnets (Diaeresis, 2001) and a swarm in the aperture (Margin to Margin, 2002). He has published poems in Verse, Hambone, First Intensity, 3rd bed, Colorado Review, and other journals. His book, The To Sound, was selected by Forrest Gander for the 2002 Verse Prize and was awarded a grant from the Greenwall Fund of the Academy of American Poets. He currently lives in western Massachusetts where he is an editor of Baffling Combustions.
Loading...
or
Not Currently Available for Direct Purchase