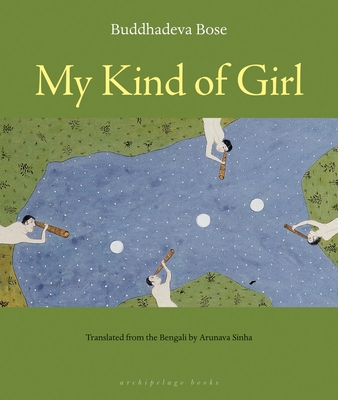 My Kind of Girl

A modern-day Bengali Decameron, My Kind of Girl is a sensitive and vibrant novella containing four disarming accounts of unrequited love. In a railway station one bleak December night, four strangers from different walks of life —a contractor, a government bureaucrat, a writer, and a doctor—face an overnight delay. The sight of a young loving couple prompts them to reflect on and share with each other their own experiences of the vagaries of the human heart in a story cycle that is in turn melancholy, playful, wise, and heart-wrenching. The tales reveal each traveler's inner landscape and provide an illuminating glimpse into contemporary life in India. Coming out of a great storytelling tradition, My Kind of Girl is a moving and imaginative look at love from one of India's most celebrated writers.

Praise For My Kind of Girl…

. . . Mellow and seductive . . . Just as Chekhov's characters are caught between up-to-date Western ways and retrograde Slavic manners, in the same way these colonial Indians are torn between an English forthrightness and a thoroughly Bengali muted sensuality. —Edmund White

It's just got the right feel . . . . At once innocent and overwhelmingly passionate, in the manner of first love . . . A novel of delicate ideas and nuances. To capture them with the right touch of lightness couldn't have been easy, yet Sinha does just that. —Mint

That My Kind of Girl—a classic modernist tale of four passengers stranded in a railway-station waiting room at night, recounting stories of lost loves - is engrossing is thanks not only to Sinha's abilities, but to the quality of Bose's narrative, which, unlike his earlier, Calcutta-based masterpiece, Tithidore (1949), inhabits a lighter, more Maupassant-like manner instead. —Rosinka Chaudhari

. . . Bose's charming and chatty prose provides us with tales as entertaining as either of those of its predecessors. . . My Kind of Girl . . . is another fine addition to Archipelago's growing impressive list of world literature. —Rain Taxi

Masterful. . . . Superbly translated . . . Bose's remarkable talent of throwing his characters' voices and at the same time inhabiting their skin is on full display in this slim, moving book. —Hindustan Times

Wonderfully decadent. . . . [Written] with consummate mastery. . . . A gem of delight. . . . Bose stokes the embers of the story alive till the last page. —Indian Express

Buddhadeva Bose (1908–74), one of the most celebrated Bengali writers of the twentieth century, was a central figure in the Bengali modernist movement. Bose wrote numerous novels, short story collections, plays, essays, and volumes of poetry. He was also the acclaimed translator of Baudelaire, Hölderin, and Rilke into Bengali. Bose was awarded the prestigious Padma Bhushan in 1970.