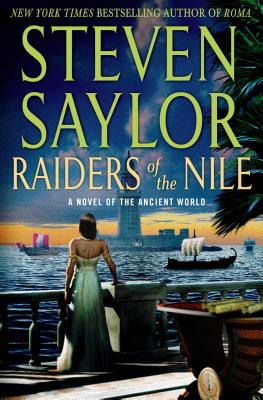 Raiders of the Nile

A Novel of the Ancient World (Novels of Ancient Rome #14)

In 88 B.C. it seems as if all the world is at war. From Rome to Greece and to Egypt itself, most of civilization is on the verge of war. The young Gordianus—a born-and-raised Roman citizen—is living in Alexandria, making ends meet by plying his trade of solving puzzles and finding things out for pay. He whiles away his time with his slave Bethesda, waiting for the world to regain its sanity. But on the day Gordianus turns twenty-two, Bethesda is kidnapped by brigands who mistake her for a rich man's mistress. If Gordianus is to find and save Bethesda, who has come to mean more to him than even he suspected, he must find the kidnappers before they realize their mistake and cut their losses. Using all the skills he learned from his father, Gordianus must track them down and convince them that he can offer something of enough value in exchange for Bethesda's release.

As the streets of Alexandria slowly descend into chaos, and the citizenry begin to riot with rumors of an impending invasion by Ptolmey's brother, Gordianus finds himself in the midst of a very bold and dangerous plot—the raiding and pillaging of the golden sarcophagus of Alexander the Great himself.

New York Times bestselling author Steven Saylor returns, chronicling the early years of his detective, Gordianus, before he assumed the title of The Finder. Raiders of the Nile is the latest in his much-loved series of mysteries set in the late Roman Republic.


Praise For Raiders of the Nile: A Novel of the Ancient World (Novels of Ancient Rome #14)…

“If you're going to tour the ancient world, you could find no better guide than Saylor, who has proven his mastery of the form” —USA Today on The Seven Wonders

“A vivid and robust writer, Saylor invests his books with exquisite detail and powerful drama.” —The Philadelphia Inquirer on A Mist of Prophecies

“As always, Saylor excels at bringing the past alive, in particular by incorporating the political issues of the day into the action.” —Publishers Weekly (starred) on The Seven Wonders

“Vivid….Saylor has found a marvelous way to bring Roman history and mores alive. This is an excellent entryway to ancient Rome.” —Booklist (starred review) on The Seven Wonders

“Saylor's ability to re-create the classical world is always astounding, and The Seven Wonders is no exception. Expertly researched and beautifully written… A thoroughly enjoyable read.” —The Deseret News

“Steven Saylor’s engrossing series centers around Gordianus the Finder—a kind of Roman Sherlock Holmes.” —The Wall Street Journal on The Triumph of Caesar