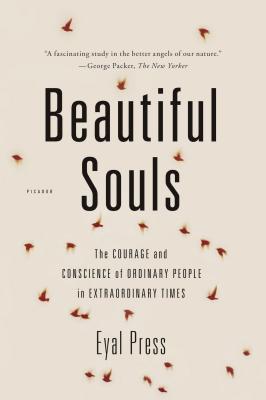 The Courage and Conscience of Ordinary People in Extraordinary Times

"A fascinating study in the better angels of our nature."—George Packer, The New Yorker

History has produced many specimens of the banality of evil, but what about its flip side, what impels ordinary people to defy the sway of authority and convention? Through these dramatic stories of unlikely resisters, Eyal Press' Beautiful Souls shows that the boldest acts of dissent are often carried out not only by radicals seeking to overthrow the system but also by true believers who cling with unusual fierceness to their convictions. Drawing on groundbreaking research by moral psychologists and neuroscientists, this deeply reported work of narrative journalism examines the choices and dilemmas we all face when our principles collide with the loyalties we harbor and the duties we are expected to fulfill.


Praise For Beautiful Souls: The Courage and Conscience of Ordinary People in Extraordinary Times…

“A hymn to the mystery of disobedience…What makes you eager to push this book into the hands of the next person you meet are the small, still moments, epics captured in miniature.... Essential.” —The New York Times

“Evocative...A valentine to the human spirit.” —The Wall Street Journal

“On stage and in the pulpit, moral dilemmas of this kind tend to have a black-and-white clarity. Working from life, Mr. Press brings out the grays….Rich in personal, circumstantial details that analytical thinkers in search of clear principles may overlook.” —The Economist

“Press examines his subjects carefully....In some ways Beautiful Souls is a thoughtful gesture of support. That might sound like a small thing, but it's not. Compassion never is.” —The New York Times Book Review

“Provides rich, provocative narratives of moral choice…Press makes us wonder if we would have the strength to act against the crowd, and in so doing spread a bit of light in our own dark times.” —The Washington Post

“Fantastic…A brilliant meditation on [the] very difficult decisions of conscience that people have to make…I just want to urge everybody, please read this book.” —The Nation

Eyal Press is an author and journalist based in New York.  His work has appeared in the New York Review of Books, The New York Times Magazine, The Nation, The Raritan Review and numerous other publications.  A 2011 Schwartz fellow at the New America Foundation, he is the author of Absolute Convictions, and a past recipient of the James Aronson Award for Social Justice Journalism.
Loading...
or support indie stores by buying on