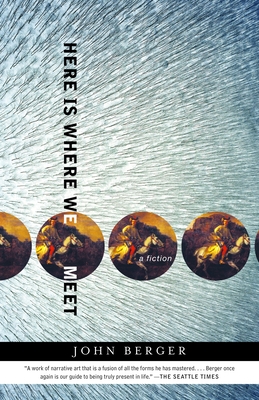 Here Is Where We Meet

Booker Prize-winning author John Berger, one of the most widely admired writers of our time, returns us to the captivating play and narrative allure of his previous novels–G. and Pig Earth among them–with a shimmering fiction drawn from chapters of his own life.

One hot afternoon in Lisbon, the narrator finds his long-dead mother seated on a park bench. “The dead don’t stay where they are buried,” she tells him. And so begins a remarkable odyssey, told in simple yet gorgeous prose, that carries us from the London Blitz in 1943, to a Polish market, to a Paleolithic cave, to the Ritz Hotel in Madrid. Here Is Where We Meet is a unique literary journey that moves freely through time and space but never loses its foothold in the sensuous present.


Praise For Here Is Where We Meet: A Story of Crossing Paths (Vintage International)…

"A work of narrative art that is a fusion of all the forms he has mastered. . . . Berger once again is our guide to being truly present in life." –The Seattle Times & Post-Intelligencer"A wonderful memoir/meditation/fiction, a vehemently personal sojourn through space and time that is almost as beautifully unclassifiable as Calvino's Invisible Cities." –Buffalo News"Either an autobiographical fiction, a fictional autobiography, or maybe a hybrid of breviary, consecration, and ancestor worship; in any case, quite brilliant." –Harper's" Berger unpacks a lifetime of living and dreaming into a series of inventive travelogues. . . . This is writing as art and armchair travel for those who love to get lost in the moment." –Kansas City Star

John Berger was born in London in 1926. He is well known for his novels and stories as well as for his works of nonfiction, including several volumes of art criticism. His first novel, A Painter of Our Time, was published in 1958, and since then his books have included Ways of Seeing, the fiction trilogy Into Their Labours, and the novel G., which won the Booker Prize in 1972. In 1962 he left Britain permanently, and lived in a small village in the French Alps. He died in 2017.