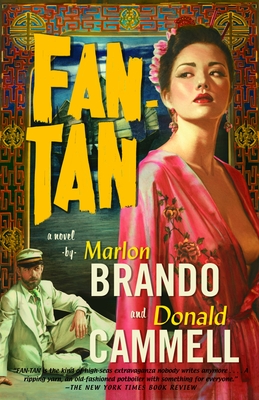 Fan-Tan is a hugely entertaining, swashbuckling romp, from one of the greatest actors of our time: Marlon Brando. The story of an eccentric early-twentieth-century pirate who sets out on the high seas from the Philippines to Shanghai, Fan-Tan follows the exploits of Anatole “Annie” Doultry, a larger-than-life character that Brando could have easily inhabited himself. When Annie saves the life of a Chinese prisoner in a Hong Kong prison, he’s led to the mysterious and seductive Madame Lai Choi San—one of the most notorious gangsters in Asia—and here the true adventures begin.Years in the making with Brando’s longtime collaborator, screenwriter and director Donald Cammell, Fan-Tan is a rollicking, delectable tale—and the last surprise from an ever-surprising legend.

“Fan-Tan is the kind of high-seas extravaganza nobody writes anymore . . . . A ripping yarn, an old-fashioned potboiler with something for everyone.” –The New York Times Book Review“An exceedingly strange, high-stepping, low-stooping tale.” –The Washington Post Book World “Fan-Tan is indeed an outrageous sea-story, with babes and pirates, drink and sex. It has an undeniable charm. . . . Students of film, lovers of Brando, or those with a hankering for another tale of avarice and deceit on the high seas will want to have a look.” –The Houston Chronicle

Marlon Brando appeared in more than forty films, including The Wild One, A Streetcar Named Desire, and Apocalypse Now, and won Academy Awards for his performances in On the Waterfront and The Godfather. His autobiography, Songs My Mother Taught Me, was published in 1994.Donald Cammell, writer, actor, producer, and director, was best known for his films Performance, Demon Seed, and Wild Side.
Loading...
or
Not Currently Available for Direct Purchase