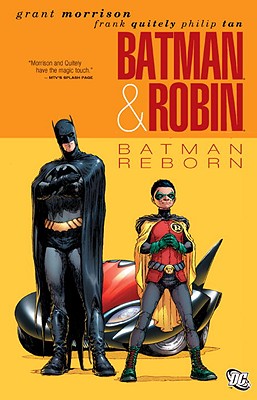 From the award-winning team behind ALL-STAR SUPERMAN!

Grant Morrison and Frank Quitely, the creative team of ALL-STAR SUPERMAN, reunite to tell the adventures of the all-new Batman and Robin.

The Dark Knight has fallen, sacrificing himself in the Final Crisis to defeat the ultimate evil. Tim Drake has laid down the mantle of Robin to search the world for a sign that his mentor can be brought back from oblivion.

Dick Grayson, the original Robin, has taken up the cape and cowl of his former partner, and Damian Wayne, the assassin-raised son of Bruce Wayne, has become a deadly new Robin — ready to fight crime by any means necessary. Together, this masked Odd Couple must stop a rising tide of villainy whose savagery and brutality are unlike
anything Gotham City has ever seen.

They must also overcome a lethal pair of rival vigilantes with ties to their own tragic pasts — and stay away from each other’s throats long
enough to succeed.

“A fresh, yet still iconic, take on the character is shining forth in Gotham and on the comic shelves…. Brilliant [and] beautiful.”—AIN’T IT COOL NEWS

“Morrison and Quitely have the magic touch that makes any book they collaborate on stand out from the rest.”—MTV’s Splash Page

Grant Morrison has been working with DC Comics for more than twenty years, beginning with his legendary runs on the revolutionary titles ANIMAL MAN and DOOM PATROL. Since then he has written numerous best-sellers — including JLA, BATMAN and New X-Men — as well as the critically acclaimed creator-owned series THE INVISIBLES, SEAGUY, THE FILTH, WE3 and JOE THE BARBARIAN. Morrison has also expanded the borders of the DC Universe in the award-winning pages of SEVEN SOLDIERS, ALL-STAR SUPERMAN, FINAL CRISIS and BATMAN, INC., and he is currently reinventing the Man of Steel in the all-new ACTION COMICS.
In his secret identity, Morrison is a “counterculture” spokesperson, a musician, an award-winning playwright and a chaos magician. He is also the author of the New York Times best-seller Supergods, a groundbreaking psycho-historic mapping of the superhero as a cultural organism. He divides his time between his homes in Los Angeles and Scotland.

Frank Quitely was born in Glasgow in 1968. Since 1988 he’s drawn The Greens (self-published), Blackheart, Missionary Man, Shimura, Inaba, ten shorts for Paradox Press, six shorts for Vertigo, FLEX MENTALLO, 20/20 VISIONS, BATMAN: THE SCOTTISH CONNECTION, THE KINGDOM: OFFSPRING, JLA: EARTH 2, THE INVISIBLES, TRANSMETROPOLITAN, THE AUTHORITY, Captain America, New X-Men, THE SANDMAN: ENDLESS NIGHTS, WE3, ALL-STAR SUPERMAN and BATMAN AND ROBIN. He has also created covers for Negative Burn, Judge Dredd Megazine, Classic 2000 AD, JONAH HEX, BOOKS OF MAGICK: LIFE DURING WARTIME, BITE CLUB, AMERICAN VIRGIN and ALL-STAR BATMAN. He lives in Glasgow with his wife and three children. He used to design his own hats and clothing. Currently his favorite hobby is cooking.
Loading...
or
Not Currently Available for Direct Purchase