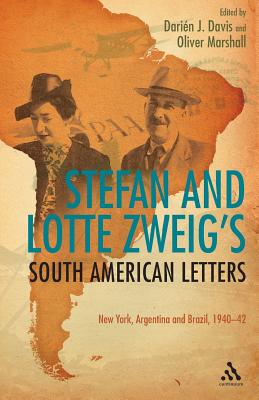 Born in Vienna in 1881, Stefan Zweig was one of the most respected authors of his time. Foreseeing Nazi Germany's domination of Europe, Zweig left Austria in 1933. In 1941, following a successful lecture tour of South America and several months in New York, Stefan Zweig and his wife Lotte emigrated to Brazil. Despairing at Europe's future and feeling increasingly isolated, the Zweigs committed suicide together in 1942.

Stefan Zweig was an incessant correspondent but as the 1930s progressed, it became difficult for him to maintain contact with friends and colleagues. As Zweig's correspondence all but ceased with the outbreak of World War II, little is known about his final years. Even less is known about Lotte Zweig, his second-wife, secretary and travel-companion. This book provides an analysis of the Zweigs' time together and for the first time reproduces personal letters, written by the couple in Argentina and Brazil, along with editorial commentary. Furthermore, Lotte finally emerges from her husband's shadows, with the letters offering significant insights into their relationship and her experience of exile.

Stefan Zweig, novelist, essayist, biographer, dramatist and pacifist, was born in Vienna in 1881 into a wealthy Austrian-Jewish family. In the 1920s and 30s Zweig enjoyed great literary fame and was one of the most translated authors in the world. With the rise of Nazism, Zweig moved to England where, in 1940, he became a British subject. Following a lecture tour of South America and a period in New York, he moved to Brazil where in 1942, in despair at the future of Europe, he and his wife committed suicide. Lotte Zweig (nee Altmann) was born in 1908 into a middle-class family of merchants in the Prussian city of Kattowitz. Soon after Hitler gained power in Germany, she moved to London. In 1934 Lotte was employed by Stefan Zweig as a multilingual secretary and research assistant. They married in 1939 and the following year left their home in Bath for the Americas. Darien J. Davis is Associate Professor of history at Middlebury College, Vermont, USA. He has written on race, migration and twentieth century intellectual and cultural history. Oliver Marshall is an independent historian based in Sussex, England, who has published on South American and international migration history. He has been a research fellow at the University of London's Institute of Latin American Studies and at the University of Oxford's Centre for Brazilian Studies and its Centre for Latin American Studies.
or
Not Currently Available for Direct Purchase