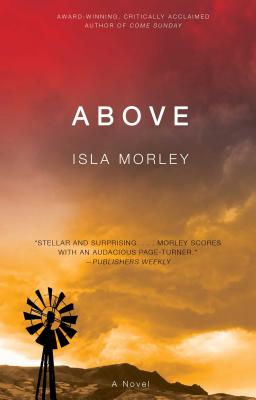 “Reeled out with the chilling calmness of a Hitchcock film, Above haunts as it illuminates. Deftly told, this tale of human resilience in the face of madness is a horror classic for our times” (Lynn Cullen, bestselling author of Mrs. Poe).

Blythe Hallowell is sixteen when she is abducted by a survivalist and locked away in an abandoned missile silo in Eudora, Kansas. At first, she focuses frantically on finding a way out, until the harrowing truth of her new existence settles in—the crushing loneliness, the terrifying madness of a captor who believes he is saving her from the end of the world, and the persistent temptation to give up. But nothing prepares Blythe for the burden of raising a child in confinement. Determined to give the boy everything she has lost, she pushes aside the truth about a world he may never see for a myth that just might give meaning to their lives below ground. Years later, their lives are ambushed by an event at once promising and devastating. As Blythe’s dream of going home hangs in the balance, she faces the ultimate choice—between survival and freedom.

“Compelling . . .haunting . . . a true page-turner. Half abduction story, half dystopian fiction, this novel will appeal to fans of both.”
— Library Journal

“Morley crafts a menacingly sinister tale of imprisonment and eerily inventive story of survival that will appeal to fans of riveting psychological suspense and cut throat dystopian fiction.”
— Booklist

“Both terrifying and shocking, and practically guaranteed to put a sense of dread in your stomach. .. . Too real for comfort. . . . Morley keeps us guessing the whole time,turning page after page as we wonder right alongside Blythe if she is ever getting back to the world she knew. . . . Gripping, chilling.”
— Bustle

“What do you get when you mix the claustrophobia of Room with the psychological suspense of Before I Go to Sleep and a dash of The Road? Perhaps something that approximates Isla Morley’s suspenseful second novel.”
— Bookpage

Combine the terror of Emma Donoghue's Room with the drama of The Hunger Games and you'll get a rough idea of how gripping Above is. Can someone make a film adaptation please?
— Cosmopolitan UK

Isla Morley grew up in South Africa during apartheid, the child of a British father and fourth-generation South African mother. She now lives in Los Angeles with her husband (a minister) and daughter and an assortment of animals. Her debut novel, Come Sunday, was awarded the Janet Heidinger Kafka Prize for Fiction in 2009 and was a finalist for the Commonwealth Prize. It has been translated into seven languages.
Loading...
or
Not Currently Available for Direct Purchase