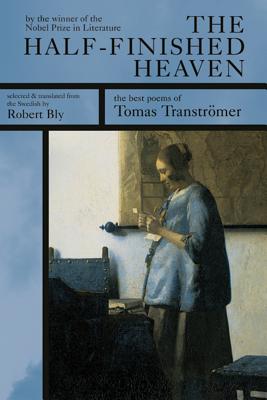 The Best Poems of Tomas Transtromer

From the Winner of the 2011 Nobel Prize in Literature

The contemporary Swedish poet Tomas Transtromer is a recipient of the Nobel Prize in Literature and has a prestigious worldwide reputation. Robert Bly, a longtime friend and confidant of Transtromer's, as well as one of his first translators, has carefully chosen and translated the finest of Transtromer's poems to create this cherished and invaluable collection.

Introduction: "Upward into the Depths" by Robert Bly

Elegy
The Scattered Congregation
Snow-Melting Time, '66
Further In
Late May
December Evening, '72
Seeing through the Ground
Guard Duty
Along the Lines (Far North)
At Funchal (Island of Madeira)
Calling Home
Citoyens
For Mats and Laila
After a Long Dry Spell
A Place in the Woods
Street Crossing
Below Freezing
Start of a Late Autumn Novel
From the Winter of 1947
The Clearing
Schubertiana

Tomas Transtromer (1933-2015) received the Nobel Prize in Literature in 2011. His books of poetry, which have been translated into sixty languages, include "The Deleted World" and "The Half-Finished Heaven," and he received numerous international honors during his lifetime. Transtromer, a trained Swedish psychologist, worked for years in state institutions with juveniles and the disabled, and his work was often praised for the inventive ways in which it examined the mind. When he was awarded the Nobel Prize, the Swedish Academy stated that "through his condensed, translucent images, he gave us fresh access to reality."

Praise For The Half-Finished Heaven: The Best Poems of Tomas Transtromer…

"The poems of Tomas Tranströmer are points of entry 'upward into / the depths' of an imagination, a spirit that is regeneratively inventive, capacious, unillusioned, undaunted, admirable . . . This extraordinary collection of work by one of Sweden's greatest contemporary poets presents a rich sampling of verse published during the past five decades."—The New York Times Book Review