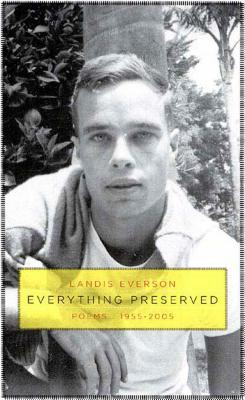 I stay upright.
Nothing makes me go down dusty roads to change my style.
I don't believe in love anymore, the foghorn
blasted it out of me.
—from "Coronado Poet"

"Why did Landis Everson stop writing poetry for forty-three years?" asks The New York Times in a recent feature article. This question permeates Everson's extraordinary first book, Everything Preserved, which collects poems written between 1955 and 1960 and, after a long silence, poems written between 2003 and 2005.

A friend of the poets Robin Blaser, Robert Duncan, and Jack Spicer, Everson became a significant figure of the Berkeley Renaissance in the 1940s and 1950s, which rebelled against the strictures of formalism to bring the poet's unmediated mind onto the page. After the group disbanded, Everson stopped writing for more than four decades, but at the prompting of editor and poet Ben Mazer, he began writing the vivid, spontaneous, and marvelous poems of the last few years.
Selected by The Poetry Foundation from more than 1,100 submissions, Everything Preserved is the debut winner of the Emily Dickinson First Book Award, which recognizes an American poet over the age of fifty who has yet to publish a book of poetry.

LANDIS EVERSON was born in 1926 in Coronado, California. His poetry has appeared in The American Poetry Review, The Kenyon Review, The New Republic, Poetry, and elsewhere. He lives in San Luis Obispo, California.