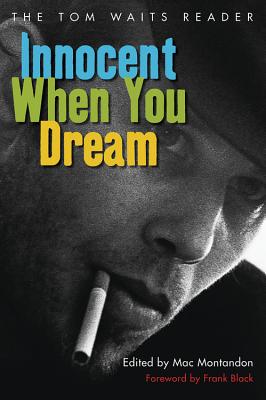 Innocent When You Dream

The first collection of writings about Tom Waits -- interviews, profiles, conversations, and more -- spanning the artist's thirty-year career in music, film and theater

Over the past three decades, Tom Waits has achieved the kind of top-shelf cult status most artists only dream about. In his varied career, he has acted alongside Jack Nicholson, Meryl Streep, and Lily Tomlin; his songs have been covered by artists as diverse as Bruce Springsteen, Sarah McLachlan, the Eagles, and the Ramones; he's won two Grammys, a Golden Globe, and been nominated for an Oscar; he's coined unforgettable phrases like "better a bottle in front of me than a frontal lobotomy" and "champagne for my real friends, real pain for my sham friends"; and he's made anyone who's ever listened to his music just that much cooler.

Here is Tom Waits in all his mischievous splendor. From a NewYorker "Talk of the Town" in 1976 to an interview by Terry Gilliam in 1999; from album reviews by Luc Sante and David Fricke to conversations with Elvis Costello and Roberto Benigni; from a recent profile in GQ to "20 Questions" in Playboy and poems by Charles Bukowski that perfectly captures the Waitsian world, this is the must-have book for every fan of the artist Beck has described as a "luminary," and for music fans everywhere.

Mac Montandon is the editor of Innocent When You Dream: The Tom Waits Reader. He has written for the New York Times, Radar, Salon.com, and Interview. He lives in Brooklyn.
Loading...
or support indie stores by buying on