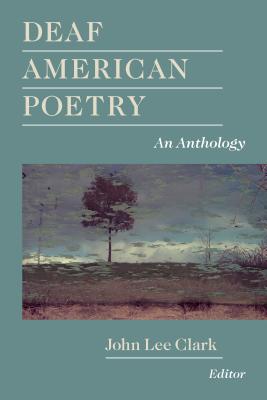 “The Deaf poet is no oxymoron,” declares editor John Lee Clark in his introduction to Deaf American Poetry: An Anthology. The 95 poems by 35 Deaf American poets in this volume more than confirm his point. From James Nack’s early metered narrative poem “The Minstrel Boy” to the free association of Kristi Merriweather’s contemporary “It Was His Movin’ Hands Be Tellin’ Me,” these Deaf poets display mastery of all forms prevalent during the past two centuries. Beyond that, E. Lynn Jacobowitz’s “In Memoriam: Stephen Michael Ryan” exemplifies a form unique to Deaf American poets, the transliteration of verse originally created in American Sign Language.

This anthology showcases for the first time the best works of Deaf poets throughout the nation’s history — John R. Burnet, Laura C. Redden, George M. Teegarden, Agatha Tiegel Hanson, Loy E. Golladay, Robert F. Panara, Mervin D. Garretson, Clayton Valli, Willy Conley, Raymond Luczak, Christopher Jon Heuer, Pamela Wright-Meinhardt, and many others. Each of their poems reflects the sensibilities of their times, and the progression of their work marks the changes that deaf Americans have witnessed through the years. In “The Mute’s Lament,” John Carlin mourns the wonderful things that he cannot hear, and looks forward to heaven where “replete with purest joys/My ears shall be unsealed, and I shall hear.” In sharp contrast, Mary Toles Peet, who benefitted from being taught by Deaf teachers, wrote “Thoughts on Music” with an entirely different attitude. She concludes her account of the purported beauty of music with the realization that “the music of my inward ear/Brings joy far more intense.”

Clark tracks these subtle shifts in awareness through telling, brief biographies of each poet. By doing so, he reveals in Deaf American Poetry how “the work of Deaf poets serves as a prism through which Deaf people can know themselves better and through which the rest of the world can see life in a new light.”

John Lee Clark is a poet and writer in St. Paul, MN.