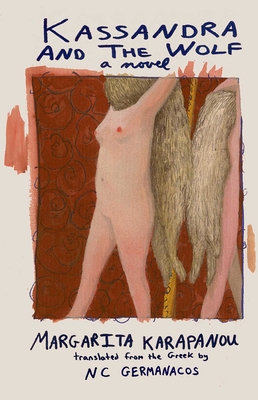 Kassandra and the Wolf

Margarita Karapanou’s Kassandra and the Wolf was first published in 1974, and went on to become a contemporary classic in Greece, receive international acclaim, and establish its 28-year-old author as an intensely original new talent, who garnered comparisons to Proust and Schulz. Six-year-old Kassandra is given a doll: “I put her to sleep in her box, but first I cut off her legs and arms so she’d fit,” she tells us, “Later, I cut her head off too, so she wouldn’t be so heavy. Now I love her very much.” Kassandra is an unforgettable narrator, a perfect, brutal guide to childhood as we’ve never seen it—a journey that passes through the looking glass but finds the darkest corners of the real world. This edition brings Kassandra and the Wolf back into print at last—a tour de force and, as Karapanou liked to call it, a scary monster of a book.

Praise For Kassandra and the Wolf…

"Karapanou" write[s] of childhood with such lyric ferocity; her 'Kassandra and the Wolf' has [a] jagged fantastic substance" with a vicious pre-pubescent sexual element chillingly added."
— John Updike, New York Times

A frank, poetic, uncluttered graph of the state of childhood.
— Edna O'Brien

No retelling of Kassandra and the Wolf can explain its charm, or its riddles... [It] is one of those rare creations that come alive mysteriously, without any antecedents. The book is original, terrifying, complete. It invents its own history, eases in and out of nightmare as it mingles dream and fact. Kassandra and the Wolf is a short, muscular novel with an absolute sense of craft... The language throughout is merciless and crisp.... [A] stunning achievement: a lovely, sinister book.
— Jerome Charyn, The New York Times

To read these two experimental works is to realize the magnitude of the loss when Greek novelist Margarita Karapanou died quite suddenly in 2008. 'Kassandra' offers a disturbing portrait of childhood. A six year old girl, a stutterer, is victimized by sexual abuse she cannot begin to fathom, her vocabulary drawn from the lurid imagery of fairy tales (the wolf). So brutalized, Kassandra cannot express emotions: given a doll to love, she cuts off its legs and arms; given a kitten to tend, she beats it, drowns it, and then lovingly wraps it in a blanket. The novel disquiets, un-eases, disturbs, but intrigues. There is a coolness to its execution, Karapanou's testing of the limited perceptions of an emotionally damaged child who cannot speak for herself compels focus less on harrowing events and more on their translation into lyric story. The same is true of the later work, 'Rien ne va plus.' Karapanou executes a deft experiment that suspends events between experience and their redesign into fiction.

Margarita Karapanou (1946–2008) was one of Greece’s most beloved contemporary writers. Her novels Kassandra and the Wolf and Rien ne va plus are both available from Clockroot Books. Karen Emmerich is an acclaimed translator of Modern Greek poetry and prose.
Loading...
or support indie stores by buying on
(This book is on backorder)