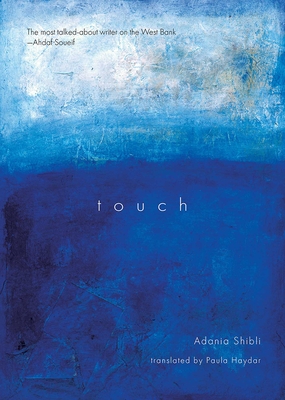 Starred Review. Celebrated young Palestinian writer Shibli-a playwright, author and essayist now located in the UK-makes her American debut with an exquisite, powerful novella that transports readers to her West Bank homeland. In spare prose, Shibli follows an unnamed little girl, the youngest in a large Palestinian family, as she examines her world and tries to understand her place in it. Though focused on the finest details-flakes of rust against skin, the softness of grass-Shibli takes readers to the center of a family and a culture, using the same careful, dispassionate observation to report everyday events like the father's shaving as she does to depict the death of a sibling in area violence. Like a great volume of poetry, Sibli's first novel (her second is forthcoming from Clockroot) has rhythm and unexpected momentum, and cries for re-reading.

"The opening of [Touch]... introduces a fragile little girl, standing alone in her landscape, in the shadow of an old, rusty water tank. She touches one of the supporting legs of the tank, and tiny, cold stains of rust stick to her palm. She stretches her hand out of the shade to warm it up in the sun, and her hand becomes sprinkled with shiny dots of shimmering gold. This is, to my mind, what Adania Shibli does with her amazingly and beguilingly simple language: making the rusty stains of reality disappear, and then making them reappear in writing as stains of gold."--Anton Shammas, author of Arabesques --Anton Shammas

"The most talked-about writer on the West Bank."
--Ahdaf Soueif, author of In the Eye of the Sun

There is much richness and beauty contained in this very short book. Shibli has an exquisite grasp of language that allows her to say a vast amount without writing much at all. Her words are precise and telling. Touch is so well crafted that the reader feels like part of the narrative, present and active in the world the author describes. She is a great talent. ...With her excellent use of language and her rich palette of images and emotional responses, Shibli has emerged as a strong new voice in Arabic literature. Her writing is nonjudgmental; she gives the reader the facts and lets them make their own judgments. Her perspective is that of the reporter, minus the sensationalism...In Touch, Shibli has created a wonderful exposition of daily Palestinian life...Yes, we all live a little differently in different parts of the world, but this work reminds us that there is more that makes us the same than there is that makes us different. In this sense Touch is a triumph.

Sometimes the task of an author- particularly one who writes about a hyper-symbolized terrain- is to un-narrativize, to pull things back apart. Adania Shibli is up to this task. Touch brings us the fragmented worldview of a narrator at the cusp of understanding her world....This is not the story an adult would tell about her childhood. Instead, Shibli breaks the story down into its component, sensory parts. It's the narrator's attempt to see colors, to hear sounds, and to take hold of her own thoughts that are given center stage...Shibli certainly has found new and affecting ways of structuring the experience of dislocation and violence, and her prose- even through the lens of translation- startles the reader into re-imagining the familiar.
— M. Lynx Qualey, Rain Taxi

Touch' purrs along like an extended prose poem-all words and sounds and images-as Shibli picks up the glinting fragments of the girl's experience, then turns them over in her hand to see how they refract the light of a world so radically constricted and reduced....slim but dazzlingly potent...a quizzically brilliant piece of writing that begins with the five senses, and builds up a precarious plot from there...At some point, she hears the words Sabra and Shatila. At another point, after a classmate is flogged at school, she learns that the word Palestine is forbidden. As far as sociopolitical context goes, that is about all there is. But in Shibli's spare prose, there is so much more besides.

When you live in a persistent war-zone, every day is a new challenge. Touch" is a novella following a young girl in modern Palestine, as she faces life's challenges as the world continues to rage on around her. From the simple processes of life to the constant tragedies, Touch proves to be a fascinating and insightful novella, not to be missed."

How often do we encounter a novelist whose writing is alchemic-whose heartrending eye for beauty seems to cause our perceptions of the world to change their substance? For the small protagonist of 'Touch', the youngest girl in a Palestinian family of ten, Adania Shibli has created a world of both extraordinary lightness and devastating intensity. A lightness of touch, a sense of distance, that allows the vision of the little girl to speak powerfully to events too harrowing to explain-the death of a brother, the massacres of Sabra and Shatila, the great questions that face her people. In the face of these, she is detached, confused, slightly mocking-it is the intensity with which she lives small experiences that turn her world into a wonderland both beautiful and terrible, extraordinary though mundane. Playing with flakes of rust floods the whole world with gold, an ear infection tears it apart in rushes of impossible sound and dreadful silence, counting passing cars can give answers to the most impossible questions. Shibli does not seek to cast new light on a world already worn out with its own troubles, already weighed down with political analysis. Instead, she elevates familiar days and domestic stories into a sensory phantasmago- ria, borne of extreme sensitivity and imagination. The newest writing in the Middle East is often full of wonder, often full of pain, two of the keenest expressions of our modernity. 'Touch' encompasses both themes, and also something else, that transcends any regional or political ideas-this small volume simply offers one of the greatest pleasures of literature. Its lines enchant, challenge and inspire, and through them you learn to see the world a little differently, to see its beauty in places you never thought to look. â

Shibli, lauded as a major young voice in Arabic fiction, deftly intertwines the mundane with the shocking to create a girl's life in uncertain times. Shibli carefully lays out events and details, as if lining up possible matching fragments of a complicated puzzle: she introduces, for example, each of the girl's eight older sisters in ascending order by age, their interactions that begin with the young girl bathing with her eighth sister to being slapped by the eldest sister by title's end. As the sparse pages turn all too quickly, haunted readers are left to piece together the shards ... both gleaming and tarnished, hopeful and resigned.

Touch, a novella by Adania Shibli, follows the story of a young Palestinian girl and of the marriage that carries her to the other side of Israeli's Wall as someone's wife. Translated by Paula Haydar, who has a history of translating innovative Arabic literature, the novella reads like a prose poem divided into five parts, all of which appeal to the senses. The story is told from the viewpoint of the young girl as she hovers over adulthood with the backdrop of Palestinian politics lurking overhead. In a minimalist narrative, the pervading silence intensifies the fleeting sensations of childhood. In the first section, 'Colors, ' each brief chapter reads like a paintbrush of color in a landscape of Palestine that quietly moves to the absence of color, a white bridal gown. In 'Silences, ' the second section, an ear infection brings the young girl a temporary 'paradise of silence' interrupted by the domestic sounds of quarreling and her brother's death. As an adult, she reclaims a 'voluntary' silence in her marriage. In the delicate section, 'Movement, ' the young girl captures the natural beauty of her mother's prayer 'as if it were the wind.' In language, the young girl finds both comfort and isolation in the power of words. The novella concludes with 'the Wall' as the bride 'sits on the bridal seat all alone, embracing the wall with her eyes.' While not for those who prefer a linear narrative, Touch lives up to its title leaving the reader with an ethereal collection of domestic images of Palestinian life trapped behind a cement wall.

Paula Haydar is Clinical Assistant Professor of Arabic at the University of Arkansas. She holds a PhD degree in comparative literature and an M.F.A. degree in literary translation. She has translated numerous novels by contemporary Lebanese, Palestinian, and Jordanian authors. Her translation of Lebanese novelist Jabbour Douaihy’s June Rain was selected as the highly commended runner-up of the 2014 Saif Ghobash Banipal Prize for Arabic Literary Translation and also made the Daily Star’s list of Top Middle East Novels of 2014. Her translations of Lebanese authors also include three novels by Elias Khoury (Gates of the City, The Journey of Little Gandhi, and The Kingdom of Strangers) and three novels by Rashid al-Daif (This Side of Innocence , Learning English, and Who’s Afraid of Meryl Streep?). Her translations of novels by Palestinian writers include Sahar Khalifeh’s The End of Spring and Adania Shibli’s Touch (Interlink). Her most recent translation is What Price Paradise by Jordanian writer Jamal Naji.
Loading...
or support indie stores by buying on
(This book is on backorder)