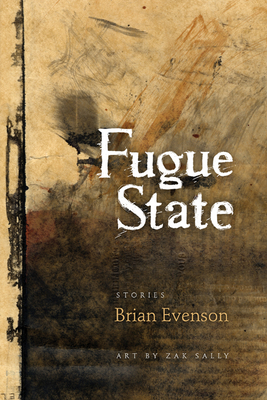 "Brilliant...Evenson manages to capture madness with a masterful tone. The specific genius of Fugue State rests in subtlety, in Evenson's ability to maintain suspense, dread and paranoia through utter linguistic control."--Time Out New York "19 satisfying and surreal stories...packed with subtly hilarious sentences."--Cleveland Plain Dealer "Brian Evenson is one of the treasures of American story writing, a true successor both to the generation of Coover, Barthelme, Hawkes and Co., but also to Edgar Allan Poe."--Jonathan Lethem The stories in this collection will thrill, unsettle, and captivate. Like lanterns in dark rooms, paper boats carried down on subterranean waters, they lead the reader into mysterious and perilous territory. Read at your own risk.--Kelly Link

Illustrated by graphic novelist Zak Sally, Brian Evenson's hallucinatory and darkly comic stories of paranoia, pursuit, sensory deprivation, amnesia, and retribution rattle the cages of the psyche and peer into the gaping moral chasm that opens when we become estranged from ourselves. From sadistic bosses with secret fears to a woman trapped in a mime's imaginary box, and from a post-apocalyptic misidentified Messiah to unwitting portraitists of the dead, the mind-bending world of this modern-day Edgar Allan Poe exposes the horror contained within our daily lives.

Brian Evenson is the author of the Edgar and International Horror Guild award-nominated novel The Open Curtain. Visit his website at www.brianevenson.com.

"Brian Evenson is the Donald Barthelme of psychological horror he has birthed a distinctive, postmodern style for exploring his favorite macabre topicsamputation, post-apocalyptic landscapes, doppelgängers, 'creatures of darkness' and religious bloodshed. Yet the grimmest turns in Evenson's writing have always been connected to a singularly modern obsession with language."Los Angeles Times

Praised by Peter Straub for going furthest out on the sheerest, least sheltered narrative precipice, Brian Evenson is the author of eight previous books of fiction, including the Edgar Award-nominated novel The Open Curtain and the International Horror Guild Award-winning collection, The Wavering Knife. He lives in Providence, Rhode Island where he directs Brown University's Literary Arts Program. Zak Sally is the author of the graphic novel, Recidivist, nominated for two Eisner Awards and named one of SPIN magazine's favorite things. He is also the author of Fantagraphic Books's Sammy the Mouse series, the former bassist of the band Low, and the publisher of La Mano press in Minneapolis.
Loading...
or support indie stores by buying on