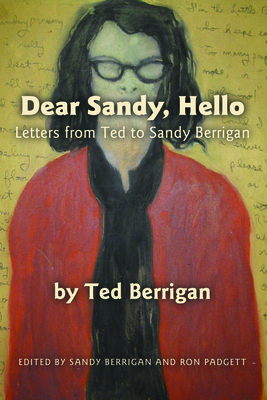 Letters from Ted to Sandy Berrigan

Ted and Sandy Berrigan's honeymoon ended when her father, a well-connected doctor, forced Sandy into a mental hospital, had Ted run out of town by the sheriff, and hired private detectives to investigate his friends. These intimate, irresistible letters, written over the course of their three-month separation, read like a passionate, epistolary novel--full of longing, intrigue, and gossip. They also offer serious advice for developing readers and writers, bring the thriving cultural scene in mid-twentieth-century New York to life, and serve as a day-by-day chronicle of Ted Berrigan's developing voice.

In addition to the letters, this collection contains never-before-published reproductions from A Book of Poetry for Sandy, featuring Berrigan's cutouts, drawings, photographs of fellow poets and artists, and excerpts from poems that eventually became The Sonnets.

This volume vividly preserves young love through Ted’s letters to Sandy while she was institutionalizedpacked with rage, frustration, and thoughts about writing . . . It’s time for less warm tears and more cold fury,’ writes Ted, transporting the reader to a time when a passionate and impulsive young woman could be committed for behavior contrary to social norms. Even those unfamiliar with Ted’s poetry will be fascinated by the drama inherent in this collection.”Publishers Weekly(starred review)

Ted Berrigan (1934-1983), a central figure in the second generation of New York School poets, was the author of more than twenty books including The Sonnets, So Going Around Cities, and A Certain Slant of Sunlight. The editor and publisher of C Magazine, he also wrote art criticism and became an influential mentor to an entire generation of writers.
Loading...
or support indie stores by buying on