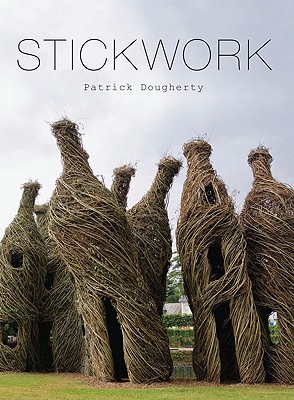 Using minimal tools and a simple technique of bending, interweaving, and fastening together sticks, artist PatrickDougherty creates works of art inseparable with nature and the landscape. With a dazzling variety of forms seamlesslyintertwined with their context, his sculptures evoke fantastical images of nests, cocoons, cones, castles, and beehives. Over the last twenty-five years, Dougherty has built more than two hundred works throughout the United States, Europe, and Asia that range from stand-alone structures to a kind of modern primitive architectureevery piece mesmerizing in its ability to fly through trees, overtake buildings, and virtually defy gravity. Stickwork, Dougherty's first monograph, features thirty-eight of his organic, dynamic works that twist the line between architecture, landscape, and art. Constructed on-site using locally sourced materials and local volunteer labor, Dougherty's sculptures are tangles of twigs and branches that have been transformed into something unexpected and wild, elegant and artful, and often humorous. Sometimes freestanding, and other times wrapping around trees, buildings, railings, and rooms, they are constructed indoors and in nature. As organic matter, the stick sculptures eventually disintegrate and fade back into the landscape. Featuring a wealth of photographs and drawings documenting the construction process of each remarkable structure, Stickwork preserves the legend of the man who weaves the simplest of materials into a singular artistic triumph.

Patrick Dougherty grew up in the woods of North Carolina and now lives in Chapel Hill.
Loading...
or
Not Currently Available for Direct Purchase