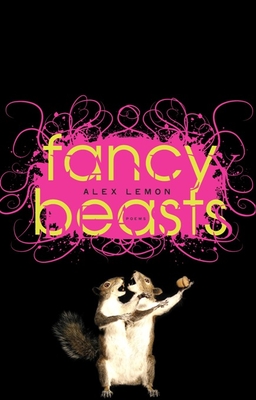 The poems of this collection are a workout: vigorous and raw, frenetic and fearless. Yet they are also composed and controlled, pared down and sculpted, with a disarming narrative simplicity and directness. Even when dealing with toxic content--including the turning point in a life of abuse, in which the recovering victim/perpetrator puzzles through the paradigm of son-to-husband-to-father--Lemon's point of view is always genuine and trustworthy.

A frank, funny, and inimitably frenetic vision of post-millennial America, Fancy Beasts is a stunning achievement from Alex Lemon.

"Full of raw energy, up-to-date in its slang and its jump cuts, effervescent with the playfulness and sometimes the angers of youth, the third collection from Lemon conveys a likable, outsized personality." Publishers Weekly

"Alex Lemon dazzles us with his ability to slice straight through nerve and marrow on his way to the heart and mind of the matter."Tracy K. Smith

"Fancy Beasts is a terrific book by one of the best younger poets at work today."Kevin Prufer

"This book will likely appeal most to twenty-somethings with an emo/hipster bent, but even older readers will be impressed by Lemon’s calculated audacity."Library Journal (starred review)

"Full of raw energy, up-to-date in its slang and its jump cuts, effervescent with the playfulness and sometimes the angers of youth, the third collection from Lemon (Hallelujah Blackout) conveys a likable, outsized personality; it should also work well in tandem with the Texas-based poet's forthcoming memoir, Happy (Scribner, 2010). Like Tony Hoagland, Lemon is often self-conscious about the volatilities his poems convey, about their almost giddy tonalities, but he will not apologize for himself: adult life is a scary gift, a fast trip, a set of close encounters with 'this fizzing pier life.'"Publishers Weekly