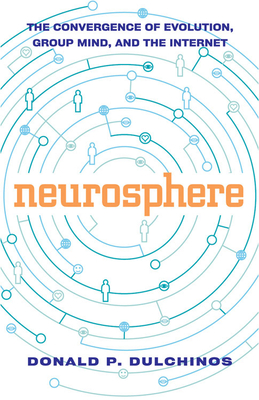 The Convergence of Evolution, Group Mind, and the Internet

According to Donald Dulchinos, the real action on the Internet isn't in the realm of commerce. It is, plain and simple, in the realm of religion. But not exactly that oldtime religion. This book is about the spiritual impact of our increasing ability to communicate quickly and with enhanced evolution. It's about our search for meaning, our hunger for a glimpse at humanity's future development in which--frighteningly or excitingly--the trend is clearly toward increasing integration of telecommunications and information technology with the body itself. Electronic prosthetics, direct neural implants, and the brain's control of electronic and mechanical limbs move the boundary that used to exist between human and machine to some undefined frontier inside our bodies, our brains, and, perhaps, our minds.

"And, if the electronics inside my brain connect directly with the electronics inside your brain, how is it meaningful to speak as though we are not part of one, larger entity?" Dulchinos writes. Another way of saying this might be that everything that rises must converge. Or, we are all part of God. Or, we are all moving toward living in the field, sharing Group Mind.

Dulchinos traces ideas of evolution, anthropology, biology, and theology, all of which point toward a betterment, a unity, and argues cogently that these ideas find their embodiment in the technology of the World Wide Web. Neurosphere or God or Group Mind, call it what you will, is about technology and the mechanics of unity.

Although other books on new technology and new consciousness touch on many of the ideas in Neurosphere, none do so in quite such a straightforward, logical way. Dulchinos has a way of telling personal stories that make the technical accessible to the dreamer, the spiritual comprehensible to the skeptic, and the future of body technology less fearinducing to everyone.

Donald P. Dulchinos has spent the last 15 years working in various aspects of cable television. He has been involved in online network communities for at least that long, as a charter member of the Boulder Community Network and an early, active member and conference host on The Well, an electronic community. He has written two books on consciousness and spirituality: Pioneer of Inner Space: The Life of Fitz Hugh Ludlow, Hasheesh Eater and Forbidden Sacraments: The Survival of Shamanism in Western Civilization, forthcoming in 2005.