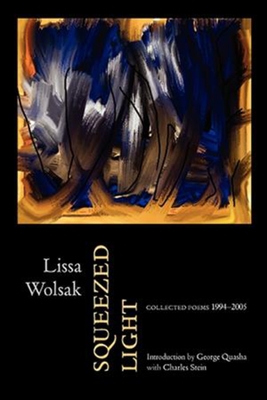 Lissa Wolsak, a poet who seemingly emerged fully-formed in the mid-1990s, now offers access to the realized body of her work in this collection. Neither easily classified nor directly traceable to a particular school or lineage, she stands instead within her own continuously evolving context-one as free of convention and fashion as it is independent of thought outside the work itself. The mirror would do well to reflect further, demands Jean Cocteau's Orphic radio voice, and Wolsak's poetry answers to this strange admonition: For the self-reflective moment in her work takes us far beyond familiar literary practices of self-attention and recursive discourse. Again and again this work reaches a genuinely mysterious interpenetration of vivid awareness, renewed language, and human care.SQUEEZED LIGHT includes all of Wolsak's previously published poetry to date, her essay in poetics An Heuristic Prolusion, an interview with the author, and an introductory essay by George Quasha with Charles Stein.

Lissa Wolsak is a poet, goldsmith, and energy-field therapist living in Vancouver, British Columbia. She has published several essays and long poem sequences, at times crossing these genres in her works.
Loading...
or
Not Currently Available for Direct Purchase