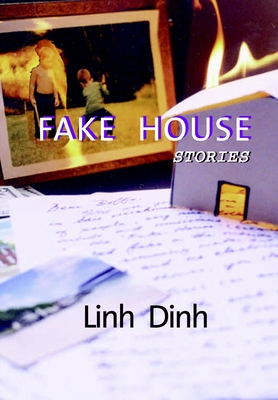 Fake House, the first collection of short stories by poet Linh Dinh, explores the weird, atrocious, fond, and ongoing intimacies between Vietnam and the United States.
Linked by a complicated past, the characters are driven by an intense and angry energy. The politics of race and sex anchor Dinh's work as his men and women negotiate their way in a post-Vietnam War world. Dinh has said of his own work, "I incorporate a filth or uncleanness to make the picture more healthy--not to defile anything."
While Fake House delves into the lives of marginal souls in two cultures, the characters' dignity lies, ultimately, in how they face the conflict in themselves and the world.

“Linh Dinh's is a unique voice in contemporary American literature. He writes with the raging wit and the soul of a poet. Infused with beautiful black humor, Fake House marks an auspicious debut for this exciting young writer.” –Jessica Hagedorn, author of Dogeaters and The Gangster of Love


“Twenty-one nervy stories portraying Asian and American culture, separately and in conflict, by a poet . . . known for his editorship of an important anthology of Vietnamese Fiction (Night, Again, 1996). . . . Vividly imagined characters . . . an interesting collection.” –Kirkus Reviews

A recipient of a Pew Foundation grant, a David T. Wong Fellowship, a Lannan Residency and, most recently, the Asian American Literary Award, LINH DINH was born in Saigon in 1963 and emigrated to the United States in 1975. An acclaimed and provocative writer of short stories and contemporary fables, he is also the author of several books of poems and a novel, Love Like Hate. Linh has edited the anthologies Night, Again: Contemporary Fiction from Vietnam and Three Vietnamese Poets. His collection of stories, Blood and Soap was chosen by the Village Voice as one of the Best Books of 2004. Linh's nonfiction essays have been published regularly at Unz Review, LewRockwell, Intrepid Report and CounterCurrents, and his blog, Postcards from the End of America (linhdinhphotos.blogspot.com), is followed by thousands of readers. He has also published widely in Vietnamese.
Loading...
or
Not Currently Available for Direct Purchase