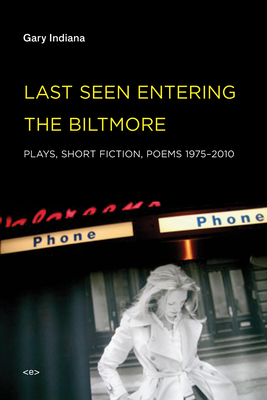 Previously unpublished plays and writings by one of today's foremost satirical authors.

This volume presents highlights of that repertoire, including Alligator Girls Go to College, The Roman Polanski Story, and Indiana's script for Michel Auder's videofilm A Coupla White Faggots Sitting Around Talking, accompanied by archival performance photographs and selections from Indiana's contemporaneous journals and poems. These hilarious, incisive writings and scripts evoke a vivid and accurate portrait of writers and artists in the lower Manhattan of the 1980s--arguably America's last avant-garde--and anticipates Indiana's impressive subsequent literary career.

Gary Indiana is a novelist, playwright, critic, essayist, filmmaker, and artist. Hailed by the Guardian as "one of the most important chroniclers of the modern psyche," and by the Observer as "one of the most woefully underappreciated writers of the last 30 years," he published a memoir, I Can Give You Anything But Love, in 2015. He is also the author of Three Month Fever: The Andrew Cunanan Story and Resentment: A Comedy (both published by Semiotex(e)).
Loading...
or
Not Currently Available for Direct Purchase