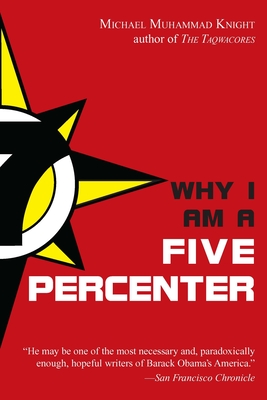 Why I Am a Five Percenter

A thoughtful, insider view of The Five Percenters-a deeply complex and misunderstood community whose ideas and symbols influenced the rise of hip-hop.

Misrepresented in the media as a black parallel to the Hell's Angels, portrayed as everything from a vicious street gang to quasi- Islamic revolutionaries, The Five Percenters are a movement that began as a breakaway sect from the Nation of Islam (NOI) in 1960s Harlem and went on to impact the formation of hip-hop. References to Five Percent language and ideas are found in the lyrics of wide-ranging artists, such as Nas, Rakim, the Wu-Tang Clan, and even Jay-Z.

The Five Percenters are denounced by white America as racists, and orthodox Islam as heretics, for teaching that the black man is Allah. Michael Muhammad Knight ("the Hunter S. Thompson of Islamic literature" -The Guardian) has engaged this culture as both white and Muslim; and over the course of his relationship with The Five Percenters, his personal position changed from that of an outsider to an accepted participant with his own initiatory name (Azreal Wisdom). This has given him an intimate perch from which to understand and examine the controversial doctrines of this influential movement. In Why I Am a Five Percenter, Knight strips away years of sensationalism to offer a serious encounter with Five Percenter thought.

Encoded within Five Percent culture is a profound critique of organized religion, from which the movement derives its name: Only Five Percent can act as "poor righteous teachers" against the evil Ten Percent, the power structure which uses religion to deceive the Eighty- Five Percent, the "deaf, dumb, and blind" masses. Questioning his own relationship to the Five Percent, Knight directly confronts the community's most difficult teachings. In Why I Am a Five Percenter, Knight not only illuminates a thought system that must appear bizarre to outsiders, but he also brilliantly dissects the very issues of"insiders" and "outsiders," territory and ownership, as they relate to religion and privilege, and to our conditioned ideas about race.

Michael Muhammad Knight has studied Islam at a madrassa in Pakistan, the Allah School in Harlem, and Harvard University. His work has been censored, boycotted, confiscated, and threatened with legal action. This is his seventh book.
Loading...
or
Not Currently Available for Direct Purchase