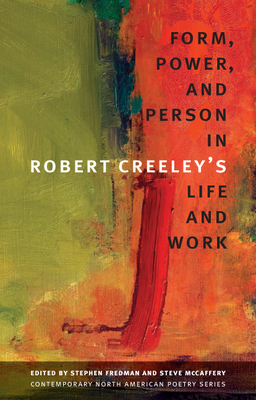 By any measure—international reputation, influence upon fellow writers and later generations, number of books published, scholarly and critical attention—Robert Creeley (1926–2005) is a literary giant, an outstanding, irreplaceable poet. For many decades readers have remarked upon the almost harrowing emotional nakedness of Creeley’s writing. In the years since his death, it may be that the disappearance of the writer allows that nakedness to be observed more readily and without embarrassment.

Written by the foremost critics of his poetry, Form, Power, and Person in Robert Creeley’s Life and Work is the first book to treat Creeley’s career as a whole. Masterfully edited by Stephen Fredman and Steve McCaffery, the essays in this collection have been gathered into three parts. Those in “Form” consider a variety of characteristic formal qualities that differentiate Creeley from his contemporaries. In “Power,” writers reflect on the pressure exerted by emotions, gender issues, and politics in Creeley’s life and work. In “Person,” Creeley’s unique artistic and psychological project of constructing a person—reflected in his correspondence, teaching, interviews, collaborations, and meditations on the concept of experience—is excavated. While engaging these three major topics, the authors remain, as Creeley does, intent upon the ways such issues appear in language, for Creeley’s nakedness is most conspicuously displayed in his intimate relationship with words.

“Reading this volume, you can’t help but picture its first dramatic staging, a blizzard-bound Buffalo night when some of our smartest and most original contemporary poets and critics improvised a conference in a hotel room that, against all odds and general conditions, retained its light and heat. These essays, marked by their own heat and often by a dazzling, dilative light, delineate—‘e quel remir contral lum de la lampa’—the incomparable shapeliness of the work of Robert Creeley, a signal poet whose influence on yet another generation of young writers is clearly surgent. Form, Power, and Person in Robert Creeley’s Life and Work invigorates our thinking not only about Creeley’s significance but also about what poetry is and does. For anyone who, like Creeley, can claim to be ‘frankly and selfishly interested in the word,’ this book is a site of memorable delight."—Forrest Gander

Stephen Fredman is professor of English at the University of Notre Dame. He is the author of Contextual Practice: Assemblage and the Erotic in Postwar Poetry and Art, Poet’s Prose: The Crisis in American Verse, and A Menorah for Athena: Charles Reznikoff and the Jewish Dilemmas of Objectivist Poetry. Steve McCaffery is a poet and the David Gray Professor of Poetry and Letters at the State University of New York at Buffalo. A founding member of the sound-poetry group Four Horsemen, McCaffery is also the author of Prior to Meaning: The Protosemantic and Poetics, Imagining Language (with Jed Rasula), and North of Intention: Critical Writings, 1973–86.