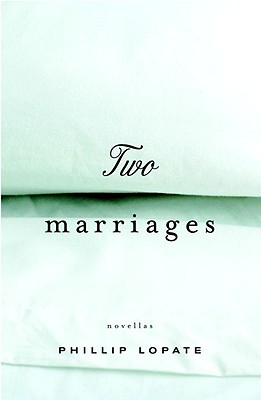 “Phillip Lopate has written two wonderful novellas portraying two marriages. Each couple is less than perfect but very real. These are not matches made in heaven, but matches made in reality or something very like it.”
— Lisa Sharp, Nightbird Books, Fayetteville, AR
View the List

Selected as one of Oprah.com's 20 Tantalizing Beach Reads
Celebrated essayist Phillip Lopate proves himself a master of the short novel form in this inspired pairing of novellas portraying two less-than-perfect unions.The Stoic's Marriage chronicles the life of newlyweds Gordon and Rita. Well-off, idle Gordon, a lifelong student of philosophy who has always had "a stunted capacity for happiness," first meets the enchanting Rita when she comes to his home as a nurse's aid sent to care for his dying mother. The attraction is instant and a marriage proposal ensues. Gordon turns to his diary to record his uxoriousness and to expound on the merits of Stoicism, the philosophy he's adopted as his "substitute religion." When Rita's cousin from the Philippines arrives one Christmas, setting in motion an outrageous and hilarious sequence of events, both Gordon's stoicism and marriage vows are put to the test.
Eleanor, or, The Second Marriage recounts one seemingly golden weekend in the lives of Eleanor and Frank, whose Brooklyn townhouse is a gathering place for their circle of cultured, cosmopolitan friends.It is Saturday morning, and Frank and Eleanor are planning the dinner they will host to celebrate the visit of a famous actor friend. These preparations are interrupted by the arrival of Frank's son, a young man deeply troubled by his own aimlessness. Other guests arrive, and in the midst of great conviviality, simmering tensions erupt into raucous emotional dramas.
Elegant, concise, and comically devastating, Two Marriages illuminates the ways in which love is inseparable from deceit.

“Two Marriages is a low-key triumph, offering two kinds of comedy while at the same time painting a vivid portrait of two marriages gone wrong.”

“A pair of lively novellas…The characters seem pulled from a lifestyle issue of New York magazine…Lopate gets in some good jabs at the chattering classes.”

Phillip Lopate is an acclaimed novelist, essayist, critic, poet, and editor. He is the author of Waterfront: A Journey Around Manhattan (2004), as well as the essay collections Against Joie de Vivre, Bachelorhood, Being with Children, Portrait of My Body, and Totally, Tenderly, Tragically. He is the editor of The Art of the Personal Essay, and the Library of America's Writing New York. Two Marriages is his first book-length fiction since The Rug Merchant (1987). He lives in Brooklyn, New York.
Loading...
or
Not Currently Available for Direct Purchase