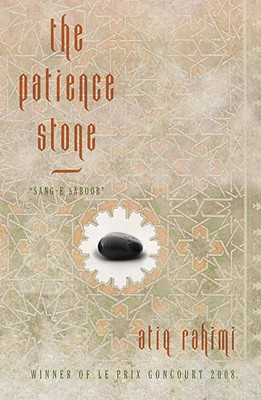 For far too long, Afghan women have been faceless and voiceless. Until now. With "The Patience Stone," Atiq Rahimi gives face and voice to one unforgettable woman and, one could argue, offers her as a proxy for the grievances of millions it is a rich read, part allegory, part a tale of retribution, part an exploration of honor, love, sex, marriage, war. It is without doubt an important and courageous book. from the introduction by Khaled Hosseini, author of "The Kite Runner" and "A Thousand Splendid Suns"
In Persian folklore, Syngue Sabour is the name of a magical black stone, a patience stone, which absorbs the plight of those who confide in it. It is believed that the day it explodes, after having received too much hardship and pain, will be the day of the Apocalypse. But here, the Syngue Sabour is not a stone but rather a man lying brain-dead with a bullet lodged in his neck. His wife is with him, sitting by his side. But she resents him for having sacrificed her to the war, for never being able to resist the call to arms, for wanting to be a hero, and in the end, after all was said and done, for being incapacitated in a small skirmish. Yet she cares, and she speaks to him. She even talks to him more and more, opening up her deepest desires, pains, and secrets. While in the streets rival factions clash and soldiers are looting and killing around her, she speaks of her life, never knowing if her husband really hears. And it is an extraordinary confession, without restraint, about sex and love and her anger against a man who never understood her, who mistreated her, who never showed her any respect or kindness. Her admission releases the weight of oppression of marital, social, and religious norms, and she leads her story up to the great secret that is unthinkable in a country such as Afghanistan. Winner of the Prix Goncourt, "The Patience Stone "captures with great courage and spare, poetic, prose the reality of everyday life for an intelligent woman under the oppressive weight of the Taliban regime in Afghanistan.

“In spare, unflinching prose, Atiq Rahimi gives us Afghanistan’s terrible legacy in the story of one woman’s suffering. Anyone seeking to understand why Afghanistan is difficult and what decades of violence have done to its people should read this book. Rahimi is a superb guide to a hard and complex land.”—Ambassador Ryan Crocker, former U.S. Envoy to Afghanistan, Ambassador to Pakistan, and Ambassador to Iraq

“The Patience Stone is perfectly written: spare, close to the bone, sometimes bloody, with a constant echo, like a single mistake that repeats itself over and over and over.”—Los Angeles Times

“This story from an Afghan-born author is a powerful one, giving voice to the historically downtrodden Afghan woman…truly an expansive work of literature.”—New York Post

“[A] clever novel…readers get a glimpse of daily life in a country terrorized by conflict and religious fundamentalism. Rahimi paints this picture with nuance and subtlety…[His] sparse prose complements his simple yet powerful storytelling prowess. This unique story is both enthralling and disturbing.”—San Francisco Chronicle

"Rahimi's lyric prose is simple and poetic, and McLean's translation is superb. With an introduction by Khaled Hosseini, this Prix Goncourt-winning book should have a profound impact on the literature of Afghanistan for its brave portrayal of, among other things, an Afghan woman as a sexual being."—Library Journal


“A slender, devastating exploration of one woman’s tormented inner life, which won the 2008 Prix Goncourt...The novel, asserts [Khaled] Hosseini in his glowing introduction, finally gives a complex, nuanced, and savage voice to the grievances of millions.”—Words Without Borders

"In this remarkable book Atiq Rahimi explores ways through which personal and political oppression can be resisted through acts of self-revelation. He reveals to us the violence we are capable of imposing upon ourselves and others both in our personal as well as political and social relations. In a manner all the more effective because of his stark and compact style, Rahimi recreates for us the texture of such violence, its almost intimate brutality as well as its fragility. Just as remarkable is the fact that although the story happens within the context of a particular time and place, the emotions it evokes and relationships it creates have universal implications and could happen to any of us under similar conditions. The Patience Stone is relevant to us exactly because as Rahimi says it takes place ‘Somewhere in Afghanistan or elsewhere.’"—Azar Nafisi, author of Reading Lolita in Tehran and Things I’ve Been Silent About

"With a veiled face and stolen words, a woman keeps silent about her forbidden pain in an Afghanistan marred by men’s foolishness. But when she rediscovers her voice, she overcomes the chaos. Atiq Rahimi tells the story of this woman’s heartbreaking lamentation to awaken our consciences."—Yasmina Khadra, author of The Swallows of Kabul

Atiq Rahimi was born in Afghanistan in 1962, but fled to France in 1984. There he has become renowned as a maker of documentary and feature films, and as a writer. The film of his novel "Earth and Ashes "was in the Official Selection at Cannes in 2004 and won a number of prizes. He is currently adapting another of his novels, "A Thousand Rooms of Dreams and Fear, "for the screen. Since 2001 Rahimi has returned to Afghanistan to set up a Writers House in Kabul and to offer support and training to young Afghan writers and filmmakers. He lives in Paris.

Polly McLean is a freelance translator based in Oxford, England. Previous translations include titles by Catherine Deneuve and Sylvia Kristel (star of the "Emmanuelle "films) as well as the award-winning "Secret "by Philippe Grimbert"