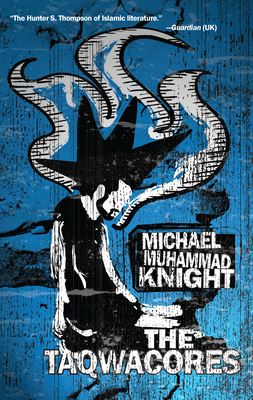 A Muslim punk house in Buffalo, New York, inhabited by burqa-wearing riot girls, mohawked Sufis, straightedge Sunnis, Shi’a skinheads, Indonesian skaters, Sudanese rude boys, gay Muslims, drunk Muslims, and feminists. Their living room hosts parties and prayers, with a hole smashed in the wall to indicate the direction of Mecca. Their life together mixes sex, dope, and religion in roughly equal amounts, expressed in devotion to an Islamo-punk subculture, “taqwacore,” named for taqwa, an Arabic term for consciousness of the divine.
Originally self-published on photocopiers and spiralbound by hand, The Taqwacores has now come to be read as a manifesto for Muslim punk rockers and a “Catcher in the Rye for young Muslims.”

There are three different cover colors; red, white, and blue.

Michael Muhammad Knight is a novelist, essayist, journalist, and scholar. He converted to Islam at sixteen and traveled to Islamabad at seventeen to study at a madrasa. His books include The Taqwacores, Blue-Eyed Devil, Tripping with Allah: Islam, Drugs, and Writing, and Why I Am a Salafi. He is an assistant professor of religious studies at the University of Central Florida in Orlando.
Loading...
or support indie stores by buying on