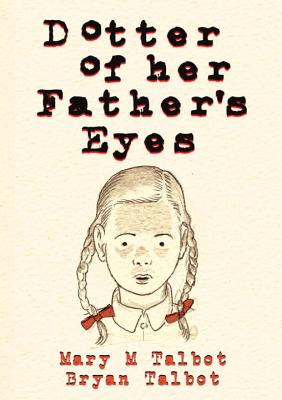 Dotter of Her Father's Eyes

Part personal history, part biography, Dotter of Her Father's Eyes contrasts two comingofage narratives: that of Lucia, the daughter of James Joyce, and that of author Mary Talbot, daughter of the eminent Joycean scholar James S. Atherton. Social expectations and gender politics, thwarted ambitions and personal tragedy are played out against two contrasting historical backgrounds, poignantly evoked by the atmospheric visual storytelling of awardwinning graphicnovel pioneer Bryan Talbot. Produced through an intense collaboration seldom seen between writers and artists, Dotter of Her Father's Eyes is smart, funny, and sadan essential addition to the evolving genre of graphic memoir.

* Bryan Talbot is recognized worldwide as one of the true original voices in graphic fiction.

Mary M. Talbot is a British academic who specializes in language, gender, and power, and is the author of Language and Gender, second edition. In 2012 she wrote her first graphic novel, Dotter of Her Father’s Eyes, illustrated by her husband, artist Bryan Talbot, which won the Costa Biography Award. She went on to publish Sally Heathcote: Suffragette (2014) and The Red Virgin and the Vision of Utopia (2016).

Bryan Talbot is a British comic book artist and writer, best known as the creator of The Adventures of Luther Arkwright; its sequel, Heart of Empire; and the award-winning The Tale of One Bad Rat. He collaborated with his wife, Mary M. Talbot, to produce Dotter of Her Father's Eyes, which won the 2012 Costa biography award.

For more please visit bryan-talbot.com/biog/index.php. The author lives in Wigan, Lancashire, England.
Loading...
or
Not Currently Available for Direct Purchase