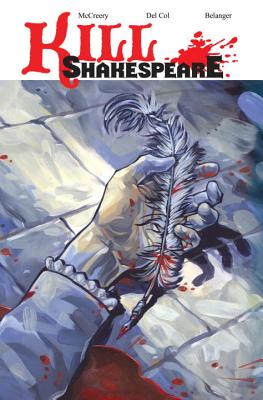 A Sea of Troubles

What Fables does for fairy tales, Kill Shakespeare does with the greatest writer of all time.

This dark take on the Bard pits his greatest heroes (Hamlet, Juliet, Othello Falstaff) against his most menacing villains (Richard III, Lady Macbeth, Iago) in an epic adventure to find and kill a reclusive wizard named William Shakespeare.

Praise For Kill Shakespeare Volume 1: A Sea of Troubles…

“A fantastic concept, cleverly executed with style and smarts. Lots of cool Easter Eggs for the literary-minded, but still plenty entertaining for the rest of us dummies!” —John Layman (Writer of Chew and former literature major)

“Bravo! Kill Shakespeare is a tale woven with the wit, magic and myth, worthy of Will himself.” —Des McAnuff (Artistic Director, The Stratford Shakespeare Festival)

“Kill Shakespeare is full of dark laughs, shocking alliances, bad puns and wild violence. Like the best of Shakespeare himself...” —Patton Oswalt (Comedian, Writer of Serenity, Star of Ratatouille and King of Queens)