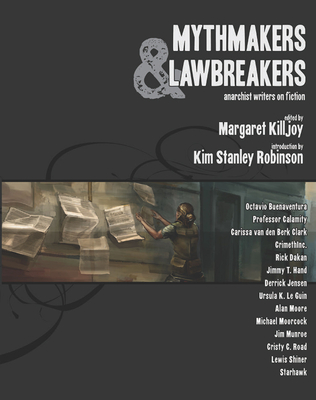 "Basically, anarchy is in fact the only political position that is actually possible."--from the interview with Alan Moore, author of V for Vendetta

We all know that there is a deeply entwined relationship between personal politics and works of fiction. For centuries, authors have used the veil of fiction to cast a critical eye toward the larger society around them: think of mile Zola, Victor Hugo, Issac Asimov, Margaret Atwood, Aldous Huxley, J.R.R. Tolkien, H.G. Wells, and even Mary Shelley. Now, for the first time, in an unprecedented new release from AK Press, some of the biggest names in contemporary fiction discuss this relationship with a specific focus on anarchist politics.

Compiled and annotated by SteamPunk Magazine founder Margaret Killjoy, and with an introduction by Kim Stanley Robinson, Mythmakers and Lawbreakers is an engaging and highly readable book--a must-read for any serious fan of sci-fi or political fiction, and a useful tool for both new and seasoned authors interested in developing their own political utopias.

Margaret Killjoy is a writer, editor, and designer. The founder of SteamPunk Magazine, and the author of The SteamPunk's Guide to the Apocalypse, Margaret lives a nomadic lifestyle and has been involved in local politics around the globe. Kim Stanley Robinson is a winner of the Hugo, Nebula, and Locus Awards. He is the author of numerious books, including the bestselling Mars trilogy and the critically acclaimed Fifty Degrees Below, Forty Signs of Rain, The Years of Rice and Salt, and Antarctica. In 2008 he was named one of Time Magazine's Heroes of the Environment.
or
Not Currently Available for Direct Purchase