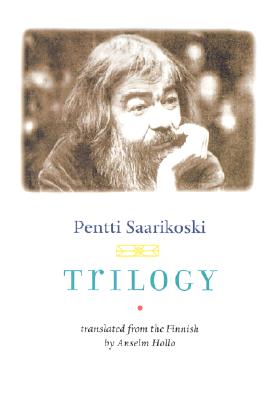 "From the late nineteen-fifties through the early seventies, Pentti Saarikoski (1937-83) was a spokesman for what European historians now refer to as the Generation of '68. He was a highly literate and iconoclastic radical in a 'buffer zone' country whose political climate in the Cold War years presented far greater ambiguities than that of the major Western European states. He was, for a time, a youth idol--the popular press referred to him as 'The Blond Beatle of the North'--whose often scandalous public behavior and pronouncements, combined with his introduction of uninhibited Finnish vernacular into the language of literature (particularly in his translations of Ulysses and The Catcher in the Rye), shocked his elders in much the same way that William S. Burroughs and Allen Ginsberg jolted the establishment in the United States. The titles of some of his books from that period--Out Loud, The Red Flags, I Look Out Over Stalin's Head--indicate his search for a public and engag mode of poetry. . . . In Trilogy, Saarikoski takes an extended, amused, bemused, and unpretentious look at some of the 'thousand things' previously sidestepped or unnoticed: the chores of dailiness; his both familiar and unfamiliar surroundings; memories thought long buried . . . Saarikoski often spoke of his conviction that poetry and walking were closely related activities; he also said: 'What I prefer to surround myself with is accidental, not intended, not premeditated, just left there, forgotten, lying around on the table--we'll use what comes to hand.' I have found his Trilogy a great book to leave lying around on my table. Very often, when it has 'come to hand, ' the way it bears witness to the world's signs has shifted them into a new light, a light whose curious, even idiosyncratic sanity justifies his claim that Herakleitos is a 'staff member' of his poetry. In life, Saarikoski often seemed to himself and others, not always happily, a 'brother from another planet'; in his work, he made that planet worth a visit and a thoughtful stroll."--excerpted from Anselm Hollo's Foreword

Anselm Hollo was born in Helsinki, Finland and was educated there and in the United States. He is now on the faculty of the Jack Kerouac School of Poetics, The Naropa University, in Boulder, Colorado, where he and his wife make their home. Hollo's own poetry has been widely anthologized, and some of it has been translated into Finnish, French, German, Hungarian, and Swedish.