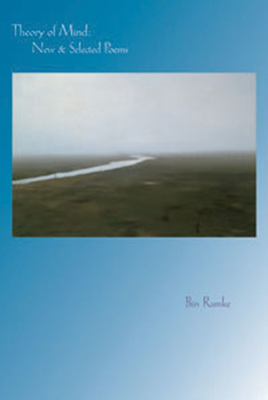 Drawing upon four decades of his poetry, and beginning with an ample selection of new work, Theory of Mind: New & Selected Poems, 1978-2008 demonstrates Bin Ramke’s ability to bring a cornucopia of human knowledge to bear upon the individual’s most intimate experiences and most compelling encounters with the world. Whether Mr. Ramke is writing about the exigencies of family life, the complex interrelations of people with environment, or the meaning of work, of health crises, of cultural upheaval, of natural disaster—he is able to draw upon an unprecedented range of social, scientific, literary, and philosophical sources. Such writing offers a lens of both telescopic and microscopic precision, and deepens our understanding of how intricately collaged is each instance of human existence.

"[Ramke] is the rare poet who seems to become more himself with each new book, rather than more like an imitation of himself. . . . And the new poems here are among Ramke's best."  —Publishers Weekly, starrred review

"He defies the conventions of both the traditional lyric and its antagonists."  —Chicago Review

"Ramke's poetry is nothing if not an attempt to find the lips and tongue of history."  —Double Room

"The translucent transience of life flowing has seldom been more poignantly and pertinently evoked. . . . He is our Heraclitus."  –John Ashbery, author, Self Portrait in a Convex Mirror

"It is [Ramke's] unflinching comparison of fault and perfection that makes his poems believable."  —Boston Review

Bin Ramke is the author of twelve books, most recently Light Wind Light Light and Missing the Moon. He was editor of the Denver Quarterly for twenty years and has taught at Columbus State University in Georgia, the University of Denver, and the School of the Art Institute of Chicago. He continues to write, teach, and live in Denver.