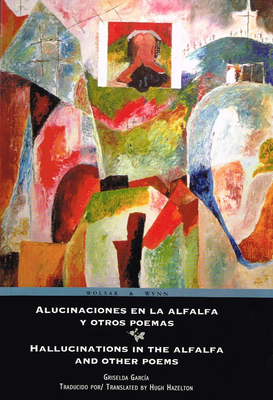 Hallucinations in the Alfalfa and Other Poems

The poetry of Griselda García is a hallucinatory journey through a landscape haunted by startling images of sensuality and desolation, humour and conflict, passion and suffering. Her lyrical, shifting visions, interwoven by a subtle, intermittent narrative line, touch on fear, love, death and redemption. Though intensely intimate, her work also echoes the trauma of recent Argentine history.

Griselda García is one of the principal voices of a younger generation of Argentine poets who have grown up in the cultural resurgence and economic uncertainty that have characterized Argentine life since the fall of the military dictatorship in 1983. She has published six collections of poetry and is highly active in the Buenos Aires literary world, both as co-editor of the small press La Carta de Oliver and as a key figure in Internet publication, which is a major component in the diffusion of contemporary Argentine writing. She has also worked with the literary review La Guacha, produced radio programs on culture and literature, worked in theatre and dance, and translated poetry by Anne Sexton and Sylvia Plath into Spanish. Alucinaciones en la alfalfa y otros poemas/Hallucinations in the Alfalfa and Other Poems is the first published translation of her work into English. Hugh Hazelton is a writer and translator who specializes in the work of Latin American writers living in Canada, as well as in comparisons between Canadian and Quebec literatures and those of the Southern Cone (Argentina, Chile, and Uruguay). He has published four books of poetry and has translated eleven books from Spanish and French into English. His translation of Vétiver (Signature, 2005) a collection of poems by the Haitian-Canadian writer Joël Des Rosiers, won the Governor General's award for French-English translation in 2006. He teaches Spanish translation and Latin American civilization at Concordia University in Montreal.
Loading...
or
Not Currently Available for Direct Purchase