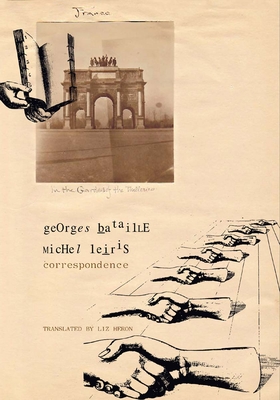 In the autumn of 1924, just before André Breton published the Manifeste du surréalisme, two young men met in Paris for the first time.  Georges Bataille, 27, starting work at the Bibliothèque Nationale; Michel Leiris, 23, beginning his studies in ethnology.  Within a few months they were both members of the Surrealist group, although their adherence to Surrealism (unlike their affinities with it) would not last long: in 1930 they were among the signatories of 'Un cadavre,' the famous tract against Breton, the 'Machiavelli of Montmartre,' as Leiris put it.  But their friendship would endure for more than 30 years, and their correspondence, assembled here for the first time in English, would continue until the death of Bataille in 1962. Including a number of short essays by each of them on aspects of the other's work, and excerpts on Bataille from Leiris' diaries, this collection of their correspondence throws new light on two of Surrealism's most radical dissidents.

Georges Bataille (1897-1962) was an essayist, philosophical theorist and novelist. Often called the ’metaphysician of evil,’ Bataille was interested in sex, death, degradation and the power and potential of the obscene. His most famous works include The Story of the Eye (1928), Blue of Noon (1945), and The Abbot C. (1950).