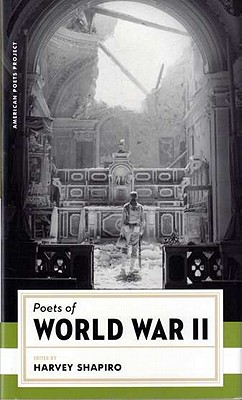 This anthology brings together 120 poems about World War II by sixty-two American poets, chosen, as editor Harvey Shapiro writes in his introduction, “with a purpose: to demonstrate that the American poets of this war produced a body of work that has not yet been recognized for its clean and powerful eloquence.” The poets are generally unsentimental, ironic, and often astonished by what they have experienced, and their insights still have the power to shake up our perceptions of that war and of war in general.

Most of the poets included in the volume served in the armed forces; some—Louis Simpson, Anthony Hecht, Kenneth Koch—saw combat in the infantry, while others—James Dickey, Howard Nemerov, Richard Hugo, John Ciardi—fought in the air. Also included: poets who experienced the war as civilians, including Robinson Jeffers, Marianne Moore, and Conrad Aiken; poems by conscientious objectors and draft resisters, including William Stafford and Robert Lowell; and an elegy by James Tate for his father, who was killed in action when Tate was an infant.