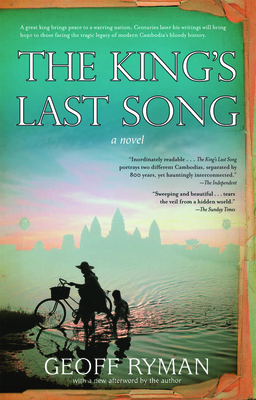 Ryman] has not so much created as revealed a world in which the promise of redemption takes seed even in horror.--The Boston Globe

"Sweeping and beautiful. . . . The complex story tears the veil from a hidden world."--The Sunday Times

"Inordinately readable . . . extraordinary in its detail, color and brutality."--The Independent

Ryman has crafted a solid historical novel with an authentic feel for both ancient and modern Cambodia.
--Washington DC City Paper

"Another masterpiece by one of the greatest fiction writers of our time."--Kim Stanley Robinson

Ryman's knack for depicting characters; his ability to tell multiple, interrelated stories; and his knowledge of Cambodian history create a rich narrative that looks at Cambodia's killing fields both recent and ancient and Buddhist belief with its desire for transcendence. Recommended for all literary fiction collections.
--Library Journal

Archeologist Luc Andrade discovers an ancient Cambodian manuscript inscribed on gold leaves but is kidnapped--and the manuscript stolen--by a faction still loyal to the ideals of the brutal Pol Pot regime. Andrade's friends, an ex-Khmer Rouge agent and a young motoboy, embark on a trek across Cambodia to rescue him. Meanwhile, Andrade, bargaining for his life, translates the lost manuscript for his captors. The result is a glimpse into the tremendous and heart-wrenching story of King Jayavarman VII: his childhood, rise to power, marriage, interest in Buddhism, and the initiation of Cambodia's golden age. As Andrade and Jayavarman's stories interweave, the question becomes whether the tale of ancient wisdom can bring hope to a nation still suffering from the violent legacy of the last century.

Geoff Ryman is the author of the novels Air (winner of Arthur C Clarke and James Tiptree awards) and The Unconquered Country (a World Fantasy Award winner). Canadian by birth, he has lived in Cambodia and Brazil and now teaches creative writing at the University of Manchester in England.

Geoff Ryman is the author of the novels Air (Clarke and Tiptree Award winner) and The Unconquered Country (World Fantasy Award winner). Canadian by birth, he has lilved in Cambodia and Brazil and now teaches creative writing at the University of Manchester in England.
Loading...
or
Not Currently Available for Direct Purchase