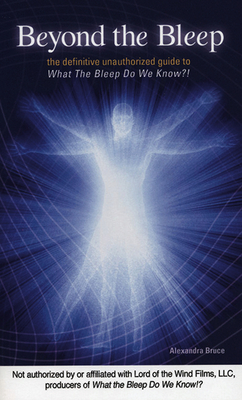 The Definitive Unauthorized Guide to What the Bleep Do We Know!? (Disinformation Movie & Book Guides)

What the Bleep Do We Know!? is the biggest New Age movie phenomenon . . . EVER!

This outrageous film plunges you into a world where quantum uncertainty is demonstrated--where neurological processes and perceptual shifts are engaged and lived by its protagonist--where everything is alive, and reality is changed by every thought. What the Bleep Do We Know!? gives voice to the modernday radical souls of science, bringing their genius to millions.

What the Bleep Do We Know!? says that science and spirituality are not different modes of thought, but are in fact describing the same thing. And it brings the power back to the individual man and woman as it demonstrates creation as the godlike capacity of every individual.

In Beyond the Bleep, Alexandra Bruce illuminates the personalities and teachings of the physicists, neurologists, anesthesiologists, physicians, spiritual teachers, mystics, and scholars in the film, as well as the filmmakers, helping the reader sort through their wilder and woollier theories with simple explanations of the cutting-edge science on which they are based. The phenomenon of the movie is only just beginning, spreading outwards from the yoga studios and health food stores of the Pacific Northwest across America and the world. There is a huge demand for more information on the topics presented in the film; Beyond the Bleep is the place to start.

Alexandra Bruce's articles on urban legends, metaphysical and quantum physics themes have been published in Paranoia Magazine, Steamshovel Press, Borderland Sciences and Disinfo.com. She is the author of Beyond The Bleep: The Definitive Unauthorized Guide To 'What The Bleep Do We Know!?' and Beyond The Secret: The Definitive Unauthorized Guide To 'The Secret'.