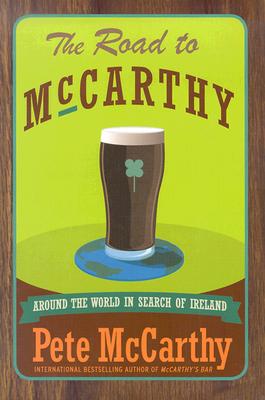 The Road to McCarthy

Around the World in Search of Ireland

Pete McCarthy established one cardinal rule of travel in his bestselling debut McCarthy's Bar: "Never pass a bar with your name on it." In this equally wry and insightful follow-up, Pete's characteristic good humor, curiosity, and thirst for adventure take him on a fantastic jaunt around the world in search of his Irish roots -- from Morocco, where he tracks down the unlikely chief of the McCarthy clan, to Rocky Sullivan's in New York, where he braves a crowd of stratospherically drunken Scotsmen in the midst of their St. Patrick's Day celebrations -- just before he is engulfed by a sea of green plastic bowler hats on Fifth Avenue.

After clocking thousands of miles and landing in more than a few exotic locations, he finally reaches his coveted destination: a remote and sparsely populated Alaskan town (named McCarthy, of course) where the eighteen townspeople are far outnumbered by the bears. Risking life, limb, and liberty in an almost heroic effort to trace his own lineage, he also happens to discover the peculiar and fascinating history of McCarthys everywhere while managing to down a few good pints along the way.

Packed with unexpected detours and dozens of hilarious moments, The Road to McCarthy is a quixotic and anything but typical Irish odyssey that confirms Pete McCarthy's status as one of the funniest and most incisive authors writing today.


Praise For The Road to McCarthy: Around the World in Search of Ireland…

“Hilarious...If McCarthy isn’t telling a fabulous yarn himself, he’s quoting someone who is.”
— Washington Post

“An entertaining romp [and] a meditation on Ireland today.”
— Conde Nast Traveler

“The funniest book I’ve read this year.”
— The Independent (UK)

“A hugely enjoyable book, heartfelt, self-aware and very funny ...an intelligent exploration of what it means to be Irish.”
— Kilkenny People

“McCarthy is a worthy addition to the ranks of P.J. O’Rourke, Bill Bryson and Peter Mayle.”
— Publishers Weekly

“Fans of Bill Bryson will enjoy reading McCarthy’s droll narrative of his rediscovery of his family’s roots in Ireland.”-
— Library Journal

“Unfailingly sharp, good-humored and offbeat: sure to please Celtophiles of every greenish hue.”
— Kirkus Reviews

“With self-deprecating wit and a sly sense of the absurd, [McCarthy] makes even the most mundane experience entertaining.”
— Booklist

“A volume [that] cannot fail to impress even the most world-weary traveller.”
— Books Magazine

“A travelogue that’s as hilariously gratifying as it is entertaining.”
— Entertainment Weekly

Pete McCarthy was born to an Irish mother and an English father. He is a hugely popular British television personality and the author of the critically acclaimed international bestseller McCarthy's Bar. He is also a recent winner of the British Book Awards Newcomer of the Year Award and the Irish Post Award for Literature.