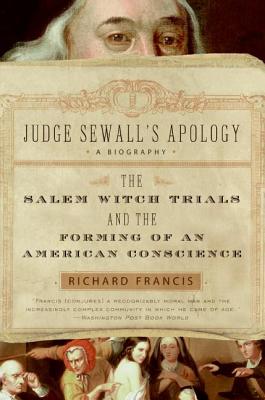 The Salem Witch Trials and the Forming of an American Conscience

The Salem witch hunt has entered our vocabulary as the very essence of injustice. Judge Samuel Sewall presided at these trials, passing harsh judgment on the condemned. But five years later, he publicly recanted his guilty verdicts and begged for forgiveness. This extraordinary act was a turning point not only for Sewall but also for America's nascent values and mores.

In Judge Sewall's Apology, Richard Francis draws on the judge's own diaries, which enables us to see the early colonists not as grim ideologues, but as flesh-and-blood idealists, striving for a new society while coming to terms with the desires and imperfections of ordinary life. Through this unsung hero of the American conscience -- a Puritan, an antislavery agitator, a defender of Native American rights, and a Utopian theorist -- we are granted a fresh perspective on a familiar drama.


Praise For Judge Sewall's Apology: The Salem Witch Trials and the Forming of an American Conscience…

“A sensitive and scholarly rendering with far-reaching perspectives that bring Sewall off the page...fresh [and] insightfully written.” — Kirkus Reviews (starred review)

“An engrossing biography [that] gives readers insight into the character of colonial America…the author’s gifts as a writer are evident.” — St. Louis Post-Dispatch

“Both an account of a troubling historical episode and the portrait of a troubled, complex man.” — Wall Street Journal

Richard Francis is a biographer, historian of American culture, and novelist. He was an American Studies Research Fellow at Harvard, and taught American literature at the universities of Missouri and Manchester. He is nowProfessor of Creative Writing at Bath Spa University in England.