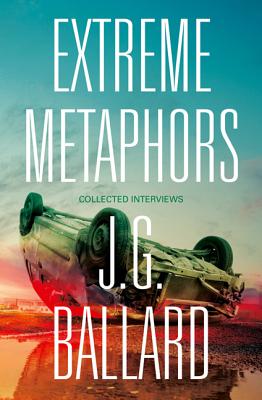 J.G. Ballard was a literary giant. Best known for his controversial bestseller 'Crash' and the memoir 'Empire of the Sun', he was a writer of unique talent - always surprising, frequently prescient.

Such acuity was not exclusive to his novels and, as this book reminds us, Ballard's restive intelligence sharpened itself in dialogue. He entertained many with insights into the world as he saw it, and speculated, often correctly, about its future. Some of these observations earned Ballard an oracular reputation, and continue to yield an uncannily accurate commentary today.

'Extreme Metaphors' collects the finest interviews of his career. Conversations with Will Self, Jon Savage, Iain Sinclair and John Gray, and collaborators like David Cronenberg, are a reminder of his wit and humanity, testament to Ballard's profound worldliness as much as his otherworldly imagination. This collection is an indispensable tribute to one of recent history's most original thinkers.

J.G. Ballard was born in 1930 in Shanghai, where his father was a businessman. After internment in a civilian prison camp, he and his family returned to England in 1946. He published his first novel, The Drowned World, in 1961. His 1984 bestseller Empire of the Sun won the Guardian Fiction Prize and the James Tait Black Memorial Prize, and was shortlisted for the Booker Prize. It was later filmed by Steven Spielberg. His memoir Miracles of Life was published in 2008. J.G. Ballard died in 2009.Simon Sellars lives in Melbourne, Australia. He is the editor of the magazine Architectural Review Asia Pacific and the publisher of ballardian.com. His writing on architecture, urbanism, film, travel and Ballard has been published widely.Dan O'Hara is a philosopher of technology and literary historian. He currently lives in Berlin, and is International Professorial Research Fellow at the Centre for Fine Art Research, Birmingham City University.
Loading...
or
Not Currently Available for Direct Purchase