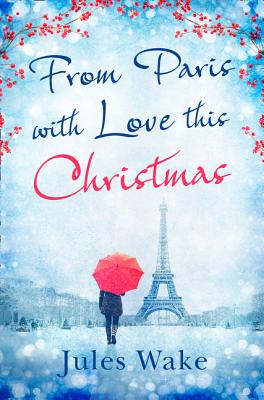 From Paris with Love This Christmas

'All the best things about Christmas wrapped into one gorgeous, romantic read' - Phillipa Ashley

The gorgeous, Christmassy feel-good follow up to the Summer best-seller 'From Italy With Love'.

That's what Paris socialite Siena keeps telling herself. She'll hide away in her sister Laurie's cottage near London to escape her hot-tempered fianc .

However, when Jason - gorgeous but a bit of a Grinch - picks her up from the airport, he reveals that Laurie hasn't lived there for months, complicating Siena's holiday getaway.

At first, Jason and Siena don't see eye to eye. But after a weekend in the most romantic city in the world, experiencing all it has to offer - from the magic of a fir-lined Champs- lys es, lit up by thousands of sparkling fairy lights, to the swoosh of skates on ice at the Eiffel Tower - Siena shows Jason her Paris, and a whole other side to herself. Suddenly Siena's December deadline seems far too close...

This Christmas, jet off to Paris with Siena and Jason and experience the magic of the holiday season.

Jules Wake's earliest known declaration that she planned to be a writer came at the age of ten.Along the way she was diverted by the glamorous world of PR and worked on many luxury brands, taking journalists on press trips to awful places like Turin, Milan, Geneva, Paris, Brussels and Amsterdam and occasionally losing the odd member of the press in an airport. It gave her the opportunity to eat amazing food, drink free alcohol as well as providing opportunities to hone her writing skills on press releases and to research European cities for her books.Eventually the voices in her head persuaded her it was time to sit down and write the novel she'd always talked about. Her debut novel, Talk to Me in 2014, was quickly followed by the bestselling From Italy With Love, published by HarperImpulse which reached the top ten in the Amazon Kindle charts. This was followed by From Paris With Love This Christmas and more recently, the best-selling Escape to the Riviera published by Avon in June last year.Jules' current book Christmas at Covent Garden is a Kindle bestseller. She also writes cosy romance as Julie Caplin and her next book, The Little Cafe in Copenhagen, will be released in February 2018.
Loading...
or
Not Currently Available for Direct Purchase