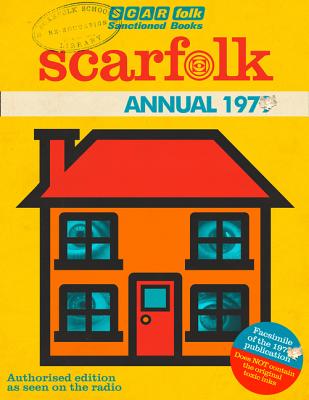 'Horrific and hilarious ... a dystopic vision of an England that would have given Orwell the heebie-jeebies' Independent'A brilliant work of satire' The Quietus

AUTHORISED EDITION, AS SEEN ON THE RADIO

The Scarfolk Annual is the facsimile of a book discovered in a charity shop in the north west of England in August 2018. The shop, and indeed town, do not wish to be identified as they are keen to "discourage the 'occult-totalitarian tourism' that as afflicted other areas of Britain" as people hunt for further socio-archaeological traces of the mysterious, missing town of Scarfolk - Britain's own Brutalist Atlantis.

Apart from the archive of Scarfolk materials which was sent anonymously to the late Dr Ben Motte and formed the basis of the book Discovering Scarfolk, this children's annual is, to date, the only complete artefact from Scarfolk ever to be unearthed 'in the wild'.

It's clear The Scarfolk Annual was not written to entertain children at Christmastime; its purpose was to indoctrinate young minds; in fact, one might go as far as to say destroy young minds, to an end that has been lost to us.

Richard Littler is a writer and graphic artist.
or support indie stores by buying on
Copyright © 2020 American Booksellers Association